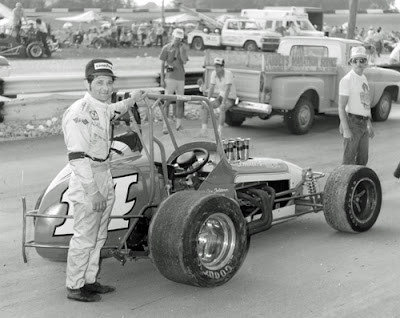 Terre Haute, Ind. (June 1, 1975) – Joe Saldana, who had scored exactly half of his United States Auto Club sprint car victories at the Terre Haute Action Track, made it a two-thirds proposition when he captured the 40-lap on Sunday afternoon.

The main event was highlighted by several lead changes.

Saldana, whose previous wins had come in the 1972 Hulman Classic at the Wabash Valley Fairgrounds and the Night Before the 500 just last month at the one-mile Indiana State Fairgrounds, was the sixth person to lead the event.

Run under a combination of first sunny, then threatening skies, the second sprint car race of the season got off to a late start due to wet track conditions.

The same conditions that created a slight delay in the program were responsible in the end for a track surface that produced excellent racing.

Gary Ponzini and Pancho Carter paced the 20-car field at the start with Ponzini jumping to a surprising lead, which lasted only two laps.

Rich Leavell streamed past Ponzini at the start of the third lap and enjoyed the top spot for three laps before encountering the misfortune of hitting the kill switch on his sprinter.

The maneuver caused the sprinter to stall, sending an oncoming George Snider up and over the stalled machine.

Although Snider was able to continue and even lead the feature, the incident was to catch up with the Bakersfield, Calif., driver before the checkered flew.

With a combination of a broken radius rod, shocks and torsion bar, snider’s left-front suspension soon began to succumb to the beating from the half-mile track.

On lap 16, Thad Dosher maneuvered his sprinter in front with a high-riding act that thrilled the fine turnout of fans.

Continuing on despite his handling issues, Snider squeezed past Dosher back into the top spot for two more circuits before Dosher once again moved in front.

At the midway point, the pair crossed the start/finish line inches apart with eventual Saldana and Jimmy Caruthers within striking distance.

Saldana and Caruthers were staging a spirited battle of their own, much to the delight of the fans.

Caruthers, soon moved into contention for first place and took the lead on lap 28 and held the top spot until the 36th circuit when Saldana surged into the lead.

The pair battle wheel to wheel to the white flag with Tom Bigelow making a late charge a close third place behind.

Bigelow managed to overhaul Caruthers for the second spot but was still three car lengths behind Saldana at the finish.