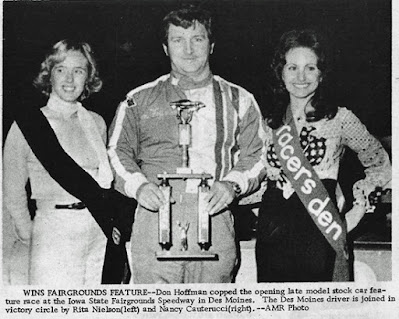 Glenn Woodard's “racer’s edge” proved too much for the other sportsman drivers as he breezed to victory in the 15-lap main event.

Hoffman and Rice thrilled the opening-night crowd of 10,013 with a bumper-to-bumper battle before Hoffman prevailed to seize the $550 top prize.

Rice put his 1973 Camaro in front at the start and remained there until the 18th lap, when Hoffman got past him high in the second turn.

“We had on the wide-tread tires because we figured that early in the year the track wouldn't dry out, but it did,” related Rice. “Don was getting better bite in the corners and that’s where he got around me."

“The car seemed to be working better through the corners,” the Des Moines native said. “It was the third time out with the new car (Camaro) and it was running pretty good…not too many problems.”

Woodard, of Des Moines, was the class of the sportsman feature as he put his Camaro ahead of his brother Leonard, who won the first heat, on the second lap and was never pressured.

Glenn felt he might have had little edge in winning the $275 first-place money.

“For most of these guys, tonight was their first time out. I’ve been running at the quarter-mile track in Stuart the past three weeks and that helped,” explained Woodard, who is driving a new car this season.

“The new car isn’t any lighter, it just seems to run better,” he said. “We’ve been working the bugs out the last few weeks and it was running real good.”

The youngest driver at the track, Dennis Rosenberg, 19, led all the way to win the 12-lap sportsman consolation race. The Grimes driver followed that triumph with a ninth-place finish in the feature.

Last season’s late model point champion, Stan Stover of Reinbeck, grabbed the lead from the pole in the consolation and held on for victory.

Stover led all 12 laps but had to hold off a late-charge by Phil Reece of Des Moines. Reece pulled up on the bumper of Stover’s 1974 Chevelle on the last lap but couldn't get around off the final turn.