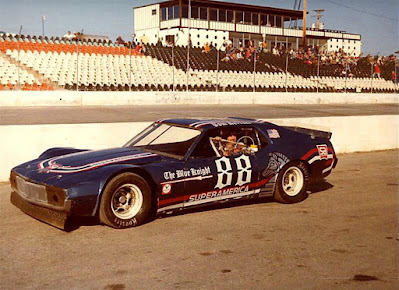 Reffner’s clocking in time trials was the first time under 18 seconds ever recorded at I-70 and eclipses the old mark of 18.01 seconds set by Bob Senneker of Door, Mich., in I-70’s Springtime 200in May of 1974. Reffner’s record represent a speed of over 109 miles per hour around the high-banked half-mile asphalt oval.

The victory was Reffner’s 11th of the season already in his 1974 AMC Javelin, a car which has outhandled and outpowered the Chevrolets that have long dominated short track stock car racing the past few years.

The 100-lap race was started early due to the threat of rain and Jack Constable of Princeton, Mo., led the first five laps, setting a torrid pace. Dick Trickle of Wisconsin Rapids, Wis., driving a 1972 Ford Mustang, then took over the top spot.

Larry Phillips of Springfield, Mo., took the lead from Trickle on a lap 15 restart and led the next three circuits until a tremendous chain reaction accident occurred on the back straightaway, collecting Jack Constable, Nyle Castle of Excelsior Springs, Mike Kempton of Shawnee Mission, Terry Brumley and Freddie Whisler of Independence, and Dick Trickle. The cars of Castle, Whisler and Trickle were demolished, and the other cars suffered serious damage.

On lap 71, Reffner got around Phillips and took over the lead. He started to string out his advantage and it appeared he was heading for an easy victory.

Then, Terry Bivins crashed into the back of David Goldsberry in turn three and Reffner was forced into the wall. Larry Phillips came blasting through and ran up alongside Reffner’s car in an effort to avoid Bivins and Goldsberry.

During the caution period, Reffner’s crew managed to pull away the damaged sheet metal from around the left rear tire and replaced a broken shock absorber, getting him back into the race.

The race resumed on lap 98 and Reffner drove unchallenged to the checkered flag.