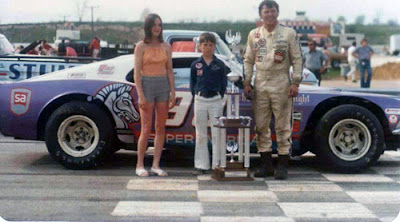 Despite getting caught up in a early-race accident, Dick Trickle of Wisconsin Rapids stormed back to win the "Spring Opener 50" at Kaukauna.

Trickle wheeled his 1970 Mustang to victory with 10 car lengths to spare over Joe Shear, South Beloit, Ill., and Rich Somers of Stevens Point.

Madison’s John Ziegler brought the crowd to its feet on lap 10 when the engine in his green 1974 Camaro exploded on the front stretch at an estimated 100 miles per hour in front of the majority of the 24-car field.

In second place at the time of the crash, Ziegler’s car broadside down the front chute in a cloud of black smoke as oil spewed from the engine onto the track.

The rest of the cars tried to avoid Ziegler’s spinning car which bounced off the first turn wall into the center of the track. In avoiding Ziegler’s car, Trickle and Marv Marzofka of Nekoosa collided in the first turn with a minor fire starting in Marzofka’s car.

Trickle’s purple racer sustained a punctured tire and wrinkled right fender. None of the drivers were injured and the fire was put out by the safety crew.

Trickle hustled his car into the pit area and a new tire was installed and the fender straightened out.

Ziegler had paced the field for the first eight laps of the 50-lap event on the banked, half-mile paved oval. Somers assumed the lead when he was able to duck under Ziegler in the third turn. However, Trickle began his move to the front and moved into second place on lap 18. On the 20th round, Kimberly’s Roger Regeth spun in the second turn, bringing out the yellow flag and bunching up the pack.

Somers and Trickle then staged a thrilling wheel-to-wheel battle with Trickle moving inside and out in an attempt to get past Somers’ 1973 Mustang.

Trickle’s opportunity came on lap 31 when he was able to sweep past Somers on the outside. The remainder of the race was an easy Sunday afternoon drive for the Wisconsin Rapids veteran with Shear nipping Somers for second on the last lap.

Beloit’s Dave Watson placed fourth in his 1973 Camaro with Bob Gunn of Madison taking fifth in a 1970 Mustang.

Pre-race favorite and fast qualifier Tom Reffner of Rudolph dropped out of the event on lap 15 with mechanical problems in his 1974 AMC Javelin. Reffner outran the field in qualifying with a lap of 21.38 seconds.