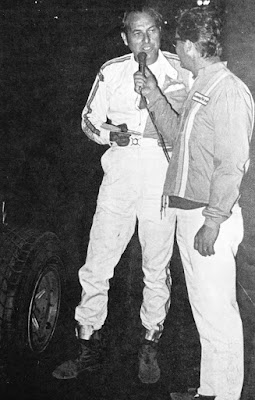 Knoxville, Iowa (May 8, 1971) – Jerry Blundy of Galesburg, Ill., capped a busy racing day with a victory in the 25-lap super modified feature at the Marion County Fairgrounds on Saturday night.

Ray Lee Goodwin of Kansas City led the first 21 laps before Blundy took over. Goodwin was then passed by Roger Rager of Lincoln, Neb., on the next lap.

Rager, who broke his nose in winning the third heat, finished second to Blundy, followed by Goodwin and Del Schmidt of Topeka, Kan. Jay Woodside of Kansas City rounded out the top five.