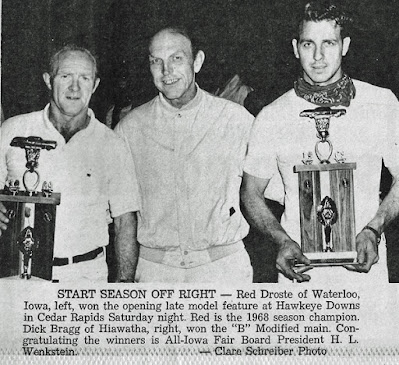 Although he admitted that his 1968 Chevelle wasn’t handling well, the Waterloo, Iowa, redhead, the 1968 Downs’ point champion, finished two car lengths ahead of Curt Hansen off Dike, Iowa, in a ’68 Torino.

Droste lost the lead to Independence, Iowa’s Glen Martin, also in a ’68 Chevelle, on the sixth lap when Droste drifted high on the backstretch, and with two laps, Martin had mounted a five-car advantage.

But Martin hit a rut on the first turn of the quarter-mile oval, and Droste forged back into the top spot with Hansen all over his tailpipe.

As Droste opened up the throttle, Hansen would drop back two car lengths and Droste would widen his margin, eventually winning by four car lengths.

Droste and Hansen were followed by Walt Carney of West Branch, Iowa, and young Bill Barthelmes of Walker, Iowa.

Late model heats went to Bill McDonough of Cedar Rapids, Iowa, in a ’68 Camaro and Barthelmes in his ’68 Chevelle, with McDonough also taking the win in the trophy dash.