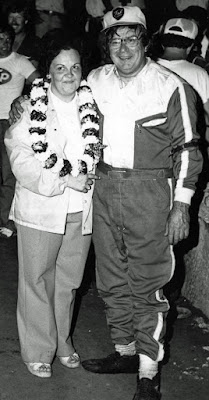 Indianapolis, Ind. (May 26, 1978) – Dick Tobias won the 34-lap finale after Lealand McSpadden and Billy Cassella each captured 33-lap features in the USAC Hoosier Sprints program at the Indiana State Fairgrounds on Friday night.

Polesitter Duane “Pancho” Carter built a commanding early lead in the first 33-lapper before McSpadden and Rich Vogler began to close the gap on lap 15.

However, after completing 18 circuits, Carter’s car was sidelined by a blown engine, turning the top spot over to McSpadden. Despite constant pressure from Vogler, the “Tempe Tornado” remained in first place the rest of the way to record his first feature win of the campaign.

Carter wasn’t the only driver deprived of a high first feature finish by a blown engine. Bobby Olivero lost his grip on third-place after his car’s powerplant gave way on the final round.

Greg Leffler charged from hi outside front row starting berth to lead the first four circuits of the second 33-lapper. Cassella, who had started fifth, edged ahead of Leffler to claim the number one spot on lap 5, but spent the next eight circuits defending the lead from the challenges of Leffler and Tobias.

Engine trouble on lap 14 eliminated Leffler and the battle between Cassella and Tobias was interrupted when Chuck Gurney smacked the fourth turn wall on lap 27.

When action resumed, Cassella held off Tobias to post the victory. Tom Bigelow placed third and was followed by defending champion Sheldon Kinser and George Snider.

Engelhart, who had earlier set fast time with a 35.036-second clocking on the one-mile dirt oval, started the 34-lap finale on the pole, but was out charged by Tom Bigelow in the battle for the top spot at the drop of the green.

Bigelow remained at the front of the pack only until reaching turn four on the opening lap when Tobias used the outside route to claim first.

Cassella moved into second moments later and pressured Tobias for the top spot throughout the race’s final 20 circuits. However, Tobias refused to relinquish the lead and soared to the checkered flag in the record time of 12 minutes and 19.70 seconds.

The victory was Tobias’ second on the USAC circuit this month, following his triumph in the Tony Hulman Classic at Terre Haute on May 6.