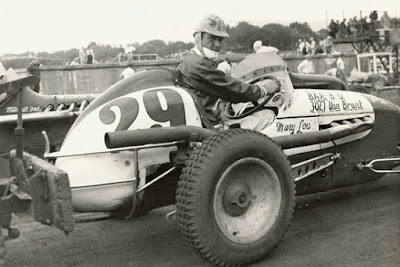 Three records were broken in the seven-card program.

Al Speth, a 41-year-old implement company employee from Davenport, driving a newly purchased Offenhauser, was killed when his car crashed into the railing on the east turn at the finish of the third heat.

Prior to the crash, which resulted in the third racing fatality on the half-mile oval since 1951, Speth had spun nearly into the rail on the opening qualifying dash.

In the second race, the 7,200 spectators watched Eddie Loetscher of St. Louis narrowly avert a crash into the east wall on the first lap of that race.

The lean pilot wheeled his Blue Crown Offy, a car owned and raced by Bill Holland here only last season, in 12 minutes and 57.9 seconds through the first 15 miles (30 laps) to better Grim’s record of 13 minutes and 18.42 seconds set on the same track in June of 1952.

However, in the jockeying past stragglers in the closing laps, Slater, second-place Jimmy Campbell of Bates City, Mo., and third-place Grim all lost time with the winner going the 25-mile distance in 23 minutes and 28.10 seconds.

Grim, a consistent winner until Sunday’s event, set the third mark of the afternoon when he thundered around the half-mile dirt oval in 24.10 seconds to create a new track record in time trials.

The Indianapolis veteran throttled his black Offenhauser, nearly a duplicate of the one driven to laurels by Luptow himself, under the 24.38 second mark set by Luptow in 1951.

From then on, Grim was forced to the rear by the heavy-footed Slater, who captured the opening qualifying dash, nosing out Billy Jim of Kansas City. Don Branson of Champaign, Ill., was the winner of the second heat and Ken Higginson of Des Moines, driving his newly-designed GMC, won the third heat, marred by Speth’s fatal crash.

The big race was strictly a three-way battle between Slater, Campbell and Grim, who race in that order, end to end, all the way.

Grim attempted twice to cut down his two rivals by shooting the curves on the inside. However, both times he was fouled up by loss of traction.

The three leaders, however, set such a break-neck pace that it took the official scorer nearly an hour afterwards to determine lesser positions, among the top-10 money spots, with most of those trialing by at least one lap if not more.

Slater’s triumph was his first this season. He acquired Holland’s car this spring after the former Indianapolis 500 winner announced he was returning to sprint car racing back east.
Results –