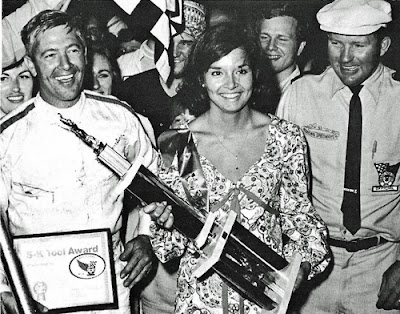 Anderson, Ind. (May 23, 1970) – Darl Harrison, one of two former Little 500 champions in the field, piloted his Chevy-powered #44 sprint car the distance in a race plagued with engine problems and an oil-slicked track to win the Little 500 for the second time Saturday night before a sellout crowd of 15,000 at Sun Valley Speedway.

The 33-car field was whittled to six by the time Harrison took the checkered flag. It was actually the first checkered flag finish for Harrison, who was relieved in the final 116 laps in 1967 by Cy Fairchild, but he officially joins and elite number of rivers who have won the sprint car classic more than once.

Harrison, a Tiffin, Ohio, native, started from the outside of the second row, taking the lead on the 296th lap and led the rest of the way, building up a cushion and taking it easy as the oil slick built up with car after car encountering mechanical problems.

The race ended under the caution flag as Taylorsville's Bobby Black, driving the #86 car from the pole position, began throwing smoke, temporarily blinding him. As he steered for the infield, he tangled with Art Braithwaite's #7 machine.

Harrison took the lead from Tom York, who had assumed it on the 194th lap after leading briefly in the early going. York stayed right behind Harrison until the 391st lap, when he encountered engine trouble and had to drop out of the race.

Although there were numerous spinouts and a few cars which smacked the wall, the race was a fairly calm one with no serious accidents and no injuries. The ambulance was not used, and the fire crew had an easy night. Engine trouble, however, took a big toll of the starting field.

Harrison had an 11-lap lead at the finish, his closest pursuer being Chuck Lynch of Springfield, Ill. There was a total of eight lead changes during the race with York and Harrison leading most of the race.

Harrison almost encountered trouble once but managed to avoid a collision. The rest of race was a steady grind for the former winner.

Last year's winner, Buzz Gregory of Indianapolis, had trouble early and only completed a few laps.

“I planned on a relief driver, the way I did in 1967,” Harrison commented after the race, “but I felt so good when I took my pit stop, I decided to go all the way.”

“The new pavement on the track makes it very smooth, I think that’s one reason I decided to stick it out. The track got very, very slippery but everyone used their heads out there.”

Naturally, Harrison wanted to win again this year, but did not feel he had the race won until the late going.

“When I saw that-lap mark, I started thinking whether I could do it again,” he remarked.

The 15,000 turnout was the first sellout in the 22-year history of the Little 500, sponsored by the International Motor Contest Association.

Third place went to Jerry Blundy of Galesburg, Ill., while Black had completed enough laps to be scored in fourth, one spot ahead of early leader Benny Rapp of Toledo, Ohio.