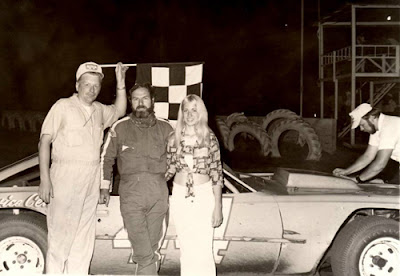 Eldon, Iowa (May 10, 1975) - Roger Dolan of Lisbon became Eldon Raceway’s third feature winner Saturday over a field of racing greats which included USAC stock car driver Don White of Keokuk. Dolan held off a field of 16 super stocks for 20 laps in one of the best competitive races ever run on the big half-mile.

Bill Zwanziger of Waterloo kept pace for the second spot losing it briefly to White, who worked his way through the field from last row starting position. Zwanziger’s winnings placed him first in the point standings.

White arrived to unveil a new model never before put into competition. He was forced into the pits during his heat race when the ignition wires became loose. Back into action in the consolation, White jumped out into the lead at the top of the green and stretched out his position for the initial victory.

Super stock heat one was a toss-up all the way between Zwanziger, Steve Fraise of Montrose, and Larry Jenkins of Wilton. Fraise overcame leader Zwanziger on the outside in turn four of the second lap fighting a hub-to-hub battle for two laps then along came Jenkins briefly nosing them both out.

Dolan and Dick Lewis of Agency led all the way for the second and third heat wins. Zwanziger zipped by Dolan out of turn four of the final lap for the Australian pursuit victory.

Dan Beaver of Tracy led all the way for the sportsman first heat over Jerry Pilcher of Ottumwa. Jerry Hamm of Ottumwa was holding third when a puff of smoke rose from his car coming out of turn four. A blaze beneath sent the Eldon fire crew to the rescue as Hamm slid onto the apron.

Sportsman second heat had difficulty clearing the number one turn. As the green flag gave the go in two starts, massive pile-ups resulted in sheet metal wrinkles, flat tires, and torn machinery. Del Beals of Ottumwa was taken to a hospital for a check-up and released reportedly okay.

Cathy Fenn presented her father, Kenny Fenn of Washington, the trophy after taking the sportsman feature as well as his heat for the third week in a row.

Eldon has had a different feature winner weekly. Jenkins, Zwanziger, and Dolan have cropped the winners’ share of the $3,500 purse.