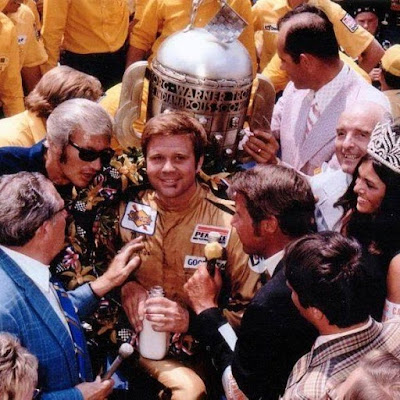 Indianapolis, Ind. (May 27, 1972) - Mark Donohue, a mild-voiced thinking man, turned over the spotlight to the owner of his Indianapolis 500-winning car at a news conference after Saturday’s race.

The 35-year-old driver answered some questions then turned over the microphone to Penske.

Penske said, “Mark and I wanted to win Watkins Glen. After we did that, the next big one had to be Indy. Now we’ve got that.”

Penske had a tough day keeping tabs on both his entries, Donohue and Gary Bettenhausen.

He said, “Mark decided to use a smaller blower on his car and the gear ratio and the gear in the transmission were different. Gary ran a great race.”

Bettenhausen, from Tinley Park, Ill., led for a long stretch in the race before having a problem with his spark plugs after slowing for a yellow light.

Referring to the smaller boost on his engine, Donohue said, “It was something I bad to live with. I was resigned to looking bad on the straightaways. I couldn’t pass anybody, even drafting (using another car’s slipstream to give a car a speed boost).”

He said, “I did it (used the smaller blower) because I felt we had to be able to run the whole distance.”

Penske said he thought second-place finisher Jerry Grant of Escondido, Calif., signaled to his pit crew that he was running out of gas before he came in on the 188th lap and yielded the lead to Donohue.

He said, “I knew we had a lap on the field after that.”

Penske said there was some question in his mind about the legality of Grant’s last pit stop. He said it appeared that Grant overshot his own pit, wound up at least partially to the pit of teammate Bobby Unser and was given gas from Unser’s gas tank.

Each car is allowed only a specific amount of fuel during the race and must use only its own supply. Grant’s car owner, Dan Gurney, said Grant actually came in for the final pit stop because a wheel on his Eagle-Offy was out of balance.

Frank DelRoy, chairman of the Speedway technical committee, ruled that no fuel was removed from Unser’s pit tank when Grant made his last pit stop.