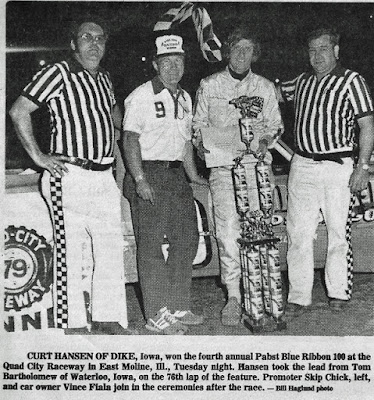 For nearly all those 75 laps, another Eastern Iowa driver – Curt Hansen of Dike, Iowa – ran second, waiting for his opportunity to move on Bartholomew.

That chance came on lap 76 when Bartholomew pushed too hard and Hansen dove underneath in the third and fourth turns, took the lead and held it for the final 25 circuits to win the fourth annual Pabst Blue Ribbon 100.

Ironically, however, it was Bartholomew who took with him the largest paycheck of the night. Although the race offered a $1,000 top prize to the winner, it also carried $20 in lap money paid to the lead car.

The only other car to finish on the lead lap with Hansen and Bartholomew was another Iowan, Mike Niffenegger of Kalona, and Hansen was threatening to put him a lap behind before a red flag halted the race on lap 97. Tony Izzo of Bridgeview, Ill, finished fourth and was the top Illinois finisher in the talented field.

The entire field, except Hansen and Bartholomew, turned time trial laps in the 16 to 17 second bracket. Bartholomew was fastest at 15.90 seconds and Hansen was a flash behind at 15.92 seconds.

Izzo walked off with the win in the first heat, Dan Bennett of Peoria, Ill., took the second heat and Bobby Toland of East Moline won the third heat.

Although the top four in time trials automatically qualified for the main event, Hansen was eligible to run the semi-feature because he finished out of the top four in his heat race. In the semi, Hansen moved steadily through the pack to take the win over Johnny Johnson of Morning Sun, Iowa, and Jerry Wolland, the racing policeman from Peoria, Ill.