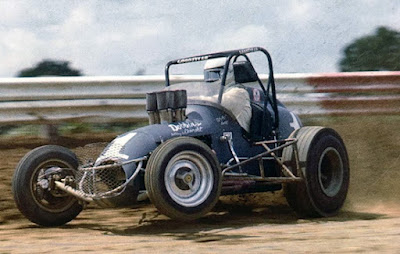 The race had to be stopped on the first lap when Jim McElreath flipped the Seibert Olds Sprinter after tangling with Chuck Booth going into turn one.

McElreath, making a rare sprint car appearance, flipped side over side several times then became airborne sailing over the guardrail. The Arlington, Tex., native was taken to the hospital with a dislocated elbow and held overnight for observation.

On the restart Gary Bettenhausen jumped into the lead from his fourth starting spot and was in command for only two laps when Carter took over with Joe Saldana hanging on his tail. Saldana, last year’s Hulman Classic winner, followed the young Carter for several laps as the two moved away from the rest of the field until the yellow flag came out on lap 21 when Larry Cannon spun in turn three.

With the field bunched up, it was Carter, Saldana, Bettenhausen, and Sheldon Kinser holding down the first four positions. At this point the real racing started as Lee Osborne was making a move in the Stouffer machine challenging Kinser for fourth.

On lap 29 Osborne shot around Kinser and set sail for Bettenhausen with George Snider, in the Elder Cadillac entry, also making his way up front as he got by Kinser on lap 35.

On lap 38 of the scheduled 40 circuits, Bettenhausen and Saldana spun in turn two creating a yellow flag finish allowing Osborne and Snider to claim second and third in the high paying event. Fourth went to Tom Bigelow with fifth going to Sheldon Kinser. Heat wins were recorded by Carter, Bigelow, Sam Sessions, and Thad Dosher. The semi-main was won by Bruce Walkup.