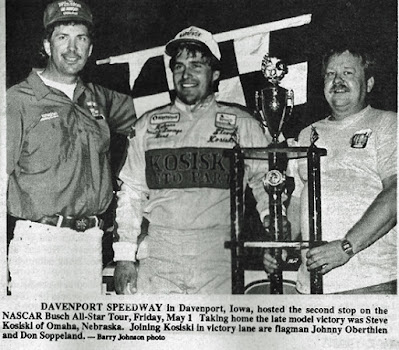 Ray Guss Jr. of Milan, Ill., had taken the lead from Curt Martin of Independence, Iowa, on the fourth turn of lap 27 and appeared unstoppable en route to the checkered flag.

But a slower car in Guss’ groove hampered the leader and Kosiski, from Omaha, Neb., who was running on Guss’ rear bumper, was able to slip by on lap 39 for the lead and eventual win.

Guss finished second behind Kosiski, as he had when the last NASCAR Busch All-Star Tour last competed at the Davenport half-mile in July 1991. Martin was third at the end.

The race winner had not really expected to end up in victory lane.

“I’m definitely surprised. Ray definitely had the fast car tonight; he ran a strong race,” Kosiski said. “He came flying right by me. He had the groove.”