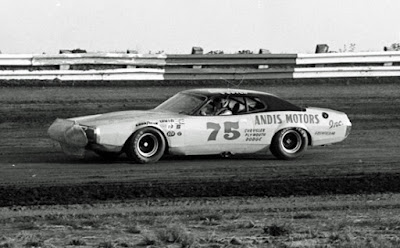 Dirt track veteran Ernie Derr of Keokuk, Iowa, led the first 49 laps of the event after starting fifth before overheating issues forced him to the sidelines. Hartman, who started on the pole, then went to the front in his 1974 Dodge Charger and led the final 51 circuits.

Don White of Keokuk, Iowa, driving a Dodge, finished second, followed by Terry Ryan of Davenport, Iowa, in a Chevrolet. Ramo Stott, also of Keokuk, Iowa, finished fourth in a Plymouth and George Coonrod of Monticello, Ind., rounded out the top five behind the wheel of a Camaro.

There were two yellow flag periods in the race – laps 55-59 when Paul Sizemore and Marcus Phelps tangled in turn one and laps 61-63 when Ryan spun in the same turn. Ryan recovered to take third.

Tony Bettenhausen, driving his own 1972 Monte Carlo, came home seventh in his first competition on dirt.

Larry Cope of LeRoy, Ind., won the 15-lap semi-main in a 1973 Mustang and Lee Pinckney of Des Moines was victorious in the 4-lap trophy dash.