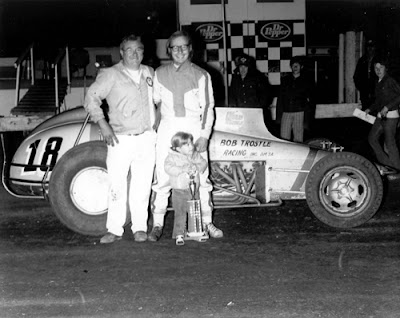 Doug Wolfgang is joined in victory lane by car owner Bob Trostle after winning at Fairmont.

Fairmont, Minn. (May 21, 1976) – Doug Wolfgang of Des Moines slipped under Roger Larson of Madison, S.D., a few yards from the finish to win the sprint car feature at Fairmont Speedway on Friday night.

The race started as a four-car battle, then turned into a two-car duel between Wolfgang and Larson. Larson, starting on the outside of the second row, took the lead on lap 4 from early leader Bill Mellenberndt of Sioux Falls, S.D. Wolfgang, who started on the outside of the third row, powered past Mellenberndt a few laps later and the race was on between Wolfgang and Larson.

Mellenberndt would stay in third until lap 23 when he drifted too high on the backstretch and spun off the wall. Darryl Dawley of Sioux Falls, S.D., would miss a spinning Mellenberndt to grab third spot.

Wolfgang collected $400 for the win while Larson earned $300. A total of 20 cars started the A-main and 12 were still running at the finish.