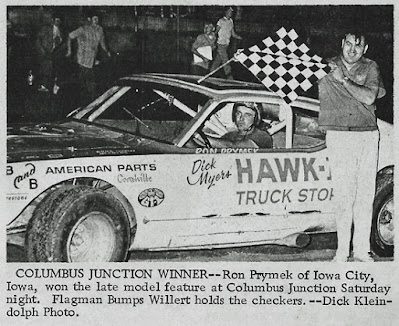 Columbus Junction, Iowa (May 19, 1972) – The weatherman cooperated, and it turned out to be a beautiful night for Mississippi Valley Speed Club racing at the Louisa County Fairgrounds.

The 25-lap late model feature was red flagged multiple times before the checkered flag fell for Ron Prymek of Iowa City. Prymek started on the front row and led from start to finish.

Crawford would win the 5-lap trophy dash, his first win of the season. Ray Guss of Milan, Ill., Perry Beckler of Tiffin, Larry Jenkins of Wilton, and Jim Gerber of Long Grove were heat winners and Gail Brenner of Wilton won the semi-main.

A field of 27 cars timed in with Bill Hopp setting the fastest time of 26.27 seconds. Ron Hemsted of Lone Tree was second quickest with a time of 26.85 seconds around the half-mile oval.