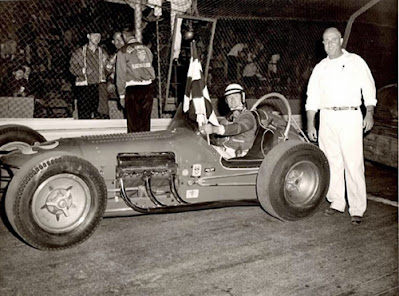 Anderson, Ind. (May 25, 1958) - Rain and a roaring field of sprint cars couldn't stop Anderson's Wayne Alspaugh on Sunday evening as he drove his way to first place honors in the 10th Annual Little 500 at Sun Valley Speedway.

The clock proved no match either for the smooth driving speedster, for Alspaugh piloted his beautiful red #2 to a record breaking victory. He covered the 125-mile grind in 2 hours, 9 minutes and 22 seconds, eclipsing by six minutes the mark set two years ago when Bob Cleburg of Rio, Wis., won the local classic.

The Anderson, Ind., driver, who has appeared in many previous Little 500’s, made only one pit stop during his 500 circuits of the famed quarter-mile. This came on lap 342 and thanks to the rapid work of his pit crew, was back on the track in short order after losing only two laps.

Alspaugh had started on the pole Sunday after leading the race Saturday night when the rains came. He had been running second to pole-sitter Bill Kimmel of Louisville, Ky., during the Saturday night segment when Kimmel made a pit stop and Alspaugh sped into the lead.

Alspaugh’s race was a picture of consistency throughout. He was never lower than third after jumping into the lead from his middle starting spot in the front row at the start of the race. Kimmel wrested the lead from him at the 11th lap and for the next several laps Kimmel and Nelson Stacy of Maysville, Ky., fought for the lead. Alspaugh was cruising behind the two leaders in third place.

Alspaugh was lucky and got through the colossal mix-up on the main straightaway during the 76th lap. That five-car pileup sidelined Stacy, though for only three laps, but allowed Alspaugh to move in behind Kimmel.

At the time of the crash, Kimmel, Stacy, Alspaugh and Cotton Farmer of Fort Worth, Texas, were all riding in the same lap. Alspaugh moved into second when Stacy got into trouble and Farmer slipped up to third.

Kimmel made his first pit stop on the 153rd lap and the rain start falling as if this – signaled the loosening of a valve.

On the 112th lap, before rain halted the Saturday night activity, Alspaugh, in a roaring battle with Kimmel, zoomed into the lead. Three laps later Kimmel had piloted his yellow #70 back to the front and stayed there until his first pit, stop.

Sun Valley officials waited several minutes until a check with the Indianapolis Weather Bureau disclosed there was no prospect for a let up in the dampness. It was then announced to the 9,000 fans attending that the race would be completed Sunday.

Farmer, White and Duman were each one lap behind Alspaugh and Tinglestad was three. Farmer lost three positions, almost immediately, as the racers whirled into the first turn. He slipped high on the curve and dropped to fourth.

This cued the beginning of bad luck for the evening, because on lap 17 he pulled into the pits with brake troubles and the stop took so long, the Texan was never again in contention.

The only serious challenge in Alspaugh’s high-flying path after the race was restarted was that made by Duman. Duman actually led the race for several laps. After running third at the 300-lap mark, he was in first place at the 350 mark because of Alspaugh’s pit stop.

When Duman finally made his stop on lap 390 he was delayed so long that the bright red deuce regained the lead and proceeded to build up a two-lap plus margin that he never relinquished.

From that point on it was just a matter for Alspaugh of staying out of the tight spots and hope the engine would hold up for the remainder of the grueling contest.

It did, and the local fellow who had tried to win the race five previous times had turned the trick. He collected $1,400 for his record-breaking performance and added more laurels to car owner Howard Hall, who is also from Anderson.

The previous best finish for Alspaugh was third in the 1955 race. He had won the pole position for three Little 500 races.