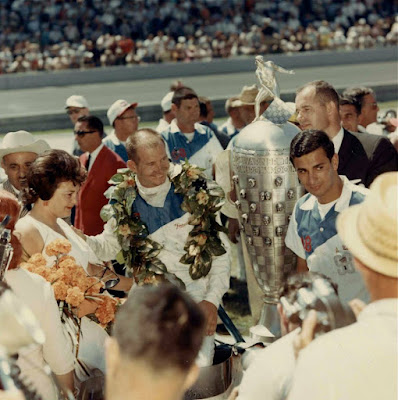 Parnelli Jones basks in the glory of winning the Indianapolis 500.

A record crowd of nearly 300,000 gave the 29-year-old Torrance, Calif., speedster a thunderous ovation as he roared across the finish line in record speed and became the seventh pole winner to win the Memorial Day classic.

Clark, a rookie here but runner-up in last year's Grand Prix world road racing standings, made a game try of it in his highly-touted British Lotus powered by an American eight-cylinder Ford engine. At one time he cut Jones’ lead to 3.5 seconds, but the Californian won by 33 seconds at a record clip of 143.13 miles per hour. The old record, set by Rodger Ward last year, was 140.293 miles per hour.

The first four finishers all beat Ward's old record. A. J. Foyt, driving the same car in which he won the grind two years ago. was third, Ward was fourth, and teammate Don Branson was fifth. Jim McElreath was sixth, the same as last year. Unofficially the top 10 were rounded out by Dan Gurney in the other Lotus-Ford. Chuck Hulse, Al Miller, and Dick Rathmann.

Only 16 of the 33 starters were running at the finish. Despite the rash of accidents which turned on the yellow caution light more than 50 minutes, no driver was injured.

It was a tremendous victory r Jones, the speedway's fastest qualifier both this year and last. It was also sweet revenge for last year when faulty brakes halted Jones' dash toward victory lane, and he finished seventh.

The race, run in sunny and mild weather, had four leaders, with Parnelli in front most of the time. He took the lead from Jim Hurtubise on the second lap, held it through the 63rd, surrendered to Roger McCluskey on his first pit stop, and took it from Clark on lap 96. That was when Clark, the race's only foreign entry, made his lone pit stop.

Clark took the lead from McCluskey, who led but four laps, on the 68th circuit.

Jones made three evenly spaced pit stops — his last two after 126 and 162 laps. He used up 72.4 seconds in the pit and retained the lead after his last two stops for tires and fuel.

Jones was driving a conventional, 4-year-old four-cylinder roadster built by A. J. Watson, who handled four winners in recent years. Jones could have had a new car. but decided to stick with the "old buggy" because it handled so perfectly.

It was also a great victory for J. C. Agajanian. Jones’ car owner, whose only other previously winner was driven by Troy Ruttman in 1952.