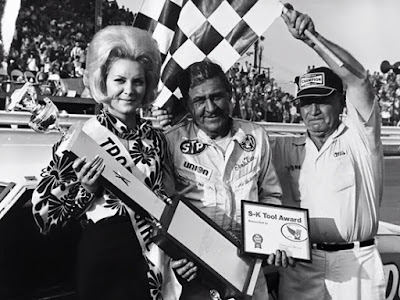 Shreveport, La. (October 31, 1971) – Ernie Derr wrapped up his 12th International Motor Contest Association national stock car championship on Sunday afternoon when he emerged as the winner of the 150-lap feature at the Louisiana State Fair. The event concluded the 1971 IMCA season and it was the finale of the State Fair’s speedway program.

Derr’s time was a new world’s record for 75 miles and it was 58 minutes and 2.33 seconds, bettering the old mark set last year in the same 150-miler by Freddy Fryar of 1 hour and 19 minutes.

Ron Hutcherson finished second and was the only other driver to finish on the same lap as the winner. Hutcherson, also from Keokuk, Iowa, drove a 1969 Dodge Charger.

Larry Phillips of Springfield, Mo., was the leader for 142 laps before he was forced to the pits for fuel and while he was sidelined, Derr overtook the front position.

Billy Bayles of West Monroe, La., was the fastest qualifier, touring the paved half-mile in 21.78 seconds.

One of the first cars out of action was Tony Bettenhausen Jr., of Houston, Tex., the son of the famed Indianapolis 500 driver. Bettenhausen was knocked out after blowing his engine. His car was crashed into by Joe Plowman of Galveston, Tex. Hughes lost control of his car on lap 38 and smashed the guardrail. Freddy Fryar of Baton Rouge, the defending champion, ran into tire trouble and finished ninth.
Results -
1. Ernie Derr
2. Ron Hutcherson
3. Larry Phillips
4. Dave Goldsberry
5. Terry Bivins
6. Phil Cronin
7. Chuck Arnold
8. Bill Bayles
9. Freddy Fryar
10. Willie Crane