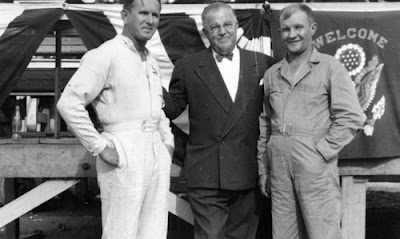 Piloting the Agajanian Offenhauser, Carter’s winning time for the grind was 22 minutes and 42 seconds.

His name will go down on the trophy offered by track owner Roy Richwine to the first driver to win the event twice. Carter sat in the same car in which Johnny Mantz won the event last year.

Tommy Hinnershitz of Reading, Penn., who tailed Carter across the finish line by nearly three-quarters of a lap, was presented with a gold trophy when he was crowned the 1950 Williams Grove Speedway champion for piling up more points than any other driver.

Mark Light of Lebanon, Penn., was forced out of action in the sixth lap of the feature, as was Vic Nanman, another Lebanon driver, when they had car failure.

In the time trials, Carter set a new track record by circling the oval in 24.62 seconds.