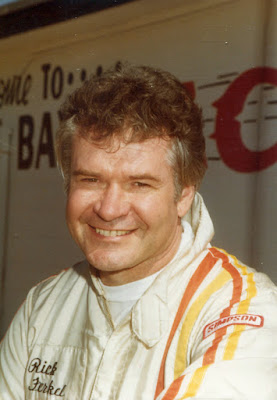 Quite a lot, as Jimmy Oskie, Don Hamilton and Ron Rea found out last year. For one thing, Rick Ferkel taught them how to lose. For another, he introduced a piece of equipment that has since revolutionized the sport.

A former auto machinist turned race car driver, Ferkel showed up at Ascot Park for last year's Pacific Coast Open sprint car championships and he had barely unloaded his Chevrolet-powered car when the jokes and snide remarks started circulating around the pits.

The object of their ridicule was the so-called “bumper” or drag race tires Ferkel installed on the rear, wheels - a full six inches wider and 10 inches larger in circumference than the traditional 94-inch “shoes” utilized by CRA drivers.

“A few of the drivers came up to me and said, ‘There's no way those tires are going to work here.’ I think they were genuinely trying to help me, but I thought I'd try ‘em anyway. Well, I guess the rest is history.”

Ferkel made some that bright October night – he went on to an embarrassingly easy victory in the 50-lap feature and picked up $2,800 from the $20,000 purse. Not by coincidence, Bubby Jones, another privateer entrant from Danville, Ill., finished second while using the radical rubber.

“The tires are fantastic because they develop a ‘crown’ when the centrifugal force builds up in a spinning tire,” explains the 33-year-old driver. “You get greater traction on a damp dirt surface since the tires have a tendency to dig in.”

“You learn to adopt these innovations as they come along. If you don't, you may end up in a breadline pretty fast.”

Ferkel is in no immediate danger of that. Last year, Ferkel - hardly a household name in American racing when compared to A.J. Foyt – still managed to gross in the neighborhood of $85,000 racing on the so-called “pirate” or “bandit” super sprint car circuit and took home close to $35,000 after expenses.

He refuses to run events sanctioned by organizations such as the United States Auto Club (USAC) because “it's not economically feasible.”

“USAC normally schedules only one or two events per week for base purses of $1,000 to $1,500. Heck, in our peak months, I may run six races in seven days for purses between $750 and $1,000, so the potential for a greater monetary return is there.”

Ferkel is one of a growing number of “racing gypsies” who tour the East, Midwest and Southwest from March until October, stopping at such exotic way stations as Williams Grove, Pa., Knoxville, Iowa, and Hinsdale, Ill. He and his chief mechanic, Jim Darley, log anywhere from 70,000 to 80,000 miles each season with their Chevy camper and 8-foot trailer rig. The rig serves as a mini-speed shop on wheels.

“We have a spare engine, a spare frame, a rear axle, new brakes, shock, absorbers, and radius rods - virtually everything to put the car back together.

We can't afford to go running back home every time we bend the car a little. Last year, we wrote off (totaled) the car and had to go home, but that's a rare exception.”

So far, Ferkel has spent the last three years in his unusual pilgrimage across the United Stales and he figures the “pluses” outweigh the “minuses”.

“I tell you one thing, I've seen it all - the dirty one-horse towns, the sleazy hotels, the horrible food and the constant pressure to do well,” he says. "But there are the good times.”

“It's hard to believe, but practically every town in the Midwest with a population over 1,000 has a race track. Some of them are real weed patches and you swear Davy Crockett carved his initials on the retaining wall, they're that old.”

“There have been times when I look up from the pits to the grandstands one hour before the race and it's empty. Ten minutes before the trophy dash, the stands are full. The people seem to come out of the hills like magic.”

Ferkel believes sprint car fans in the Midwest are the most rabid and woe be the intruder who beats the hometown hero.

“I know I've been the bad guy on some occasions. They don't like it when they have a local ‘hot shot’ and you use his car for traction in a turn: It's kind of hard for them to idolize Superman one minute and then all of a sudden find out he's Minnie Mouse the next minute.”