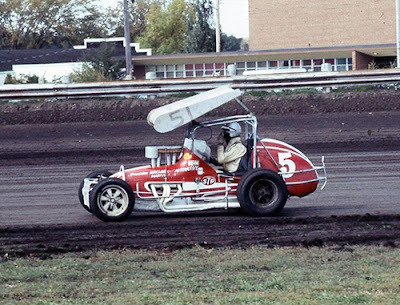 Sioux Falls, S.D. (October 8, 1973) – For a time it seemed Earl Wagner would be unable to run in Sunday’s Cheater’s Day at the W.H. Lyons Fairgrounds.

During warmups Wagner’s engine apparently blew up as he was steaming down the backstretch. But it turned out to be a broken dry sump line and the Pleasantville, Iowa, ace was ready to roll once the action started.

Dawley led the main event of 17 laps with Goodwin and Wagner close behind. Wagner took over second place on the 15th circuit and passed Dawley on lap 18. Dawley almost got the lead back on the same lap he lost it, but Wagner blasted out of the fourth turn with a slight lead and was never headed again.

Harry Torgerson, the 1972 and ’73 champ at Huset Speedway, was fourth in the event and Dave Skari was fifth.