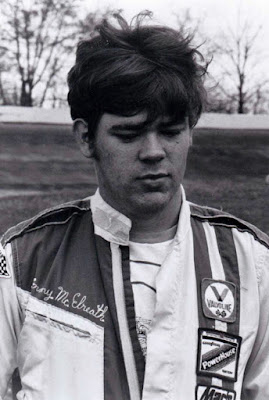 But Saturday at State Fair Speedway it was James McElreath, the veteran racer’s 22-year-old son who was in the spotlight.

James took a wire-to-wire victory in the International Motor Contest Association 25-lap sprint car feature, won the first heat and was second in the trophy dash.

“It’s just a matter of time and a little more experience,” said the proud father of his son’s potential to move up to the bigger, more powerful Indianapolis-type cars.

James’ time for the 25 turns around the half-mile asphalt oval was 8 minutes and 59 seconds as he fought off the challenges of Ronnie Burke of Houston, Tex.

Burke, running for the first time in an IMCA-sanctioned race, had won the second 10-lap heat in the day’s best time of 3 minutes and 36.4 seconds and also took the trophy dash in 1 minute and 45.8 seconds.

Bill Thrasher of Mesquite, Tex., was the winner of the third heat in 3 minutes and 39 seconds.

A crowd of 3,000 saw the drivers set new State Fair Speedway records for sprint cars in the 5, 10 and 25-lap distances since it was the first time for that type of auto to run at the track since it was paved in 1969.

Utz totaled 95 points for a day’s work, which included a second-place finish in the middle heat race, and wrapped up the national title over Larry Kirkpatrick of Wood River, Ill.

Kirkpatrick had to withdraw his car from the feature on Saturday because “it wasn’t handling right.”

“The car isn’t designed for pavement. I was just trying to get by on account of the point’s race. I’m used to racing on dirt tracks and it’s hard to get the car set up for pavement,” he added.

McElreath has gotten most of his experience at Devil’s Bowl Speedway where he’s champion in both sprint cars and super modifieds. He’s been driving competitively for five years.

“I like the track,” McElreath said. “It was a little slick, but it was okay.”