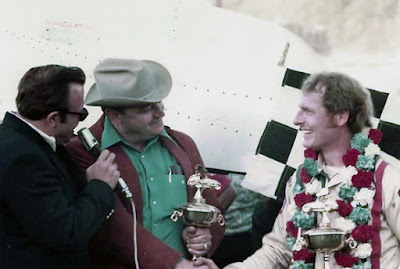 The nation’s winningest super sprint pilot gave the 12,000 plus fans a demonstration of his driving skills as he worked his way through traffic even though his brakes had gone out with 40 laps to go.
Weld’s victory, his 45th of the season, was worth $4,100 from the total purse of $14,000.

Weld started o the pole as a field of 35 took the green for the initial 75-lap segment. He posted a time off 24.40 seconds in Saturday’s time trials to earn the inside of the front row next to Steve Smith of Hanover, Penn.

Smith, clocked in 24.91 seconds in the trials, shot into the lead at the waving of the green, and kept it for 10 laps, but he spun out while trying to avoid another car which had flipped and had to drop back to scratch (last).

Geared for a slick track by the Bob Weikert crew, Weld pushed his #29 sprinter in front and was not to be denied his third consecutive National Open triumph.

Jan Opperman was second at the halfway mark but yielded to Lynn Paxton on the 105th lap. Two yellow flags gave Paxton a crack at Weld, but Kenny proved equal to both challenges.

Paxton found himself running low on fuel late in the event, and Bobby Allen came on strong for second. It was a long haul back for Allen, who had slipped from seventh to 27th before a red flag gave his crew time to make some necessary adjustments.

Opperman placed third and Van May, who ran with the leaders throughout, was fourth. Smith rallied to take fifth as Paul Pitzer, up with the front five all afternoon long, suffered a flat tire on the final lap.