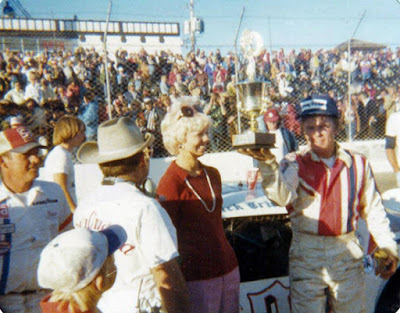 Eddy dominated most of the contest, leading 320 of thee event’s 400 laps, and was in the lead when he bobbled slightly exiting turn four on the 386th circuit. Trickle, who was close behind, capitalized on the mistake by surging around eddy to take the lead at the outset of lap 387 and led the rest of the way to record the victory. He averaged 79.036 miles per hour despite 85 caution laps.

John Anderson, the only other driver to complete the full 400 lap distance, place third and could well have won the race had he not incurred a one-lap penalty for passing Eddy’s pace-setting Camaro during a caution period on lap 292. Bob Senneker came in fourth, Jerry Makara fifth and defending ASA titlist Dave Watson in sixth.

Even though he was sidelined by a broken piston after 320 laps, Mark Martin was credited with 16th place in the 36-car field to pick up enough points to clinch the 1978 Circuit of Champions driving crown.

“Winning the championship is nice,” Martin said, “But I would have rather won the race. It’s sort of anti-climatic winning a championship while you’re in the pits.”

Bob Sensiba, who set a track record with a 17.17 second tour of the .54-mile paved banked oval, started the 400-lapper on the pole and charged into the lead at the drop of the green.

However, after leading the way for four laps, a dry sump pump problem forced Sensiba to bring his car to the pit area for the first in a series of lengthy stops. The problem eventually forced retirement after 65 laps.

Eddy inherited the top spot and remained in front until lap 193. Martin took over the top spot a lap later and stayed in the lead until yielding to Eddy on the 229th circuit.

Eddy surrendered the lead to Martin for the second time on lap 298 and the 19-year-old Batesville, Ark., pilot remained on top until lap 321 when he was forced to the sidelines, turning first-place over to Trickle.

Eddy passed Trickle to regain command four rounds later but was unable to open a comfortable advantage over the Wisconsin Rapids, Wis., chauffeur.

Then on lap 386, Eddy made his slight mistake which Trickle converted into victory.

“I was starting to lose some of my stagger, but I was running real hard and just lost it,” a dejected Eddy said afterwards. “I lapsed just for an instance.”