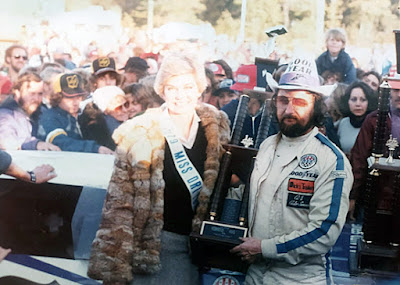 Surrounded by well-wishers, Don Gregory is presented his trophy after winning the Dri-Powr 400 at Winchester. - Fred Meeks Collection
Winchester, Ind. (October 7, 1979) – It finally happened. For the first time in six years there is a new champion of the Dri-Powr 400.

Don Gregory of Columbus, Ohio, driving an Oldsmobile Cutlass, took the checkered flag Sunday afternoon at the Winchester Speedway with a new track record of 2 hours, 18 minutes and 35.79 seconds for an average speed of 86.852 miles per hour.

Gregory broke the track record set by Bob Senneker of Dorr, Mich., who had won the race for five straight years. Senneker was second to Gregory on lap 336 when his engine let go, causing him to spin into the wall in turn four. He finished 17th.

Taking runner-up honors was Ray Young of Dolton, Ill., in a Camaro.

Gregory, an ASA perennial favorite but seldom a winner said, “It was a great feeling and couldn’t have had happened at a better race than this one.”

The track was a tribute to a very safe and fast race with the lead changing hands 11 times between seven drivers. The caution light was on for a total of 80 laps on 10 different occasions.

The start of the race saw pole-sitter Randy Sweet jump into the lead ahead of Mike Eddy, Senneker and Dave Roahrig. Gregory, starting in the 14th position, had moved into fifth place by lap 42.

On lap 80, Senneker made his move to the front but pitted on lap 91, and Roahrig took command for the next 61 circuits, followed closely by L.J. Lines.

Lines took over the lead when Roahrig pitted on lap 163. Eddy moved back into second, followed by Senneker, with Gregory still playing the waiting game.

On lap 193, Eddy took over first, followed by Roahrig and Young. In heavy traffic on lap 246, Senneker came from third spot to move on top with ASA point leader Mark Martin in second.

Martin passed Senneker on lap 302 but engine issues knocked him out a few laps later. Senneker regained the lead with Eddy close behind. Three laps later, Eddy passed Senneker, but he ran out of gas and lost two laps to the leaders.

By this time, Gregory and Young were closing in on Senneker, who led until lap 319 when Gregory took over on a caution flag.

Senneker gave chase to Gregory until blowing his engine on lap 336. Young, a half-lap behind, tried to make up the distance but was unable to overtake the leader. 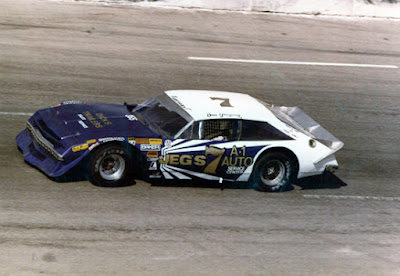