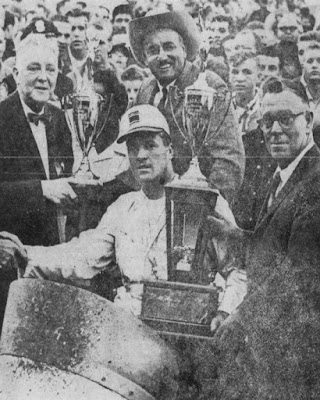 And this is the route he traveled to win the Golden State 100 championship dirt car race on the California State Fairgrounds on Sunday afternoon before a throng of 12,400.

Foyt was in command of the situation beginning with the seventh lap as he shattered a track record in being clocked for 100 miles in 1 hour, 2 minutes and 59.14 seconds. His time represented a speed of 97.22 miles per hour.

The Houston, Tex., speedster who dominated the 1961 United States Auto Club competition, also set a record for the 50-mile distance as he timed in 31 minutes and 48.05 seconds.

For his afternoon ride over a surface deemed excellent by the contestants, Foyt pocketed $3,970 from the record purse of $19,115 and lap awards and accessory money raised his total earnings to $5,720.

The personable Foyt, whose triumph was a popular one with the big crowd, said he likes to ride high on the track and after the first few laps, began his descent to the outside groove.

“I trailed Jim (Hurtubise) low for the first few laps,” Foyt recounted. “but soon found out I couldn’t get anywhere low, so I moved up to the high side. For me, I can get more speed out of the car riding against the cushion.”

Foyt’s record smashing performance was accomplished despite a slipping clutch which bothered him during the last 20 circuits. He admitted afterwards that he slowed down rather than risk being forced out at such a late stage in the race.

Foyt, who is the third driver in the history of the Golden State 100 to win more than once, his other being in 1960, said he did not push his car and preferred to cling to his lead and “ride it out.”

During his victorious spin, Foyt nearly lapped the field as he had a 24-second bulge on the second-place finisher, Don Branson of Champaign, Ill., who was trailing the winner by three-quarters of a mile.

It didn’t take long for Foyt to catch up to the tail end of the 18 starters as he began overtaking them on lap 19 and continued the process until he was forced to ease up on the throttle due to the slipping clutch.

Hurtubise, the early pace setter for the first six laps, settled for fourth behind Branson and Elmer George of Speedway, Ind., who came with a rush in the final 10 laps to gain third place.

Hurtubise, a former Golden State winner, held onto second for 32 laps before being passed by Jim McElreath of Arlington, Tex. McElreath eventually retired on lap 61 with a brake problem.