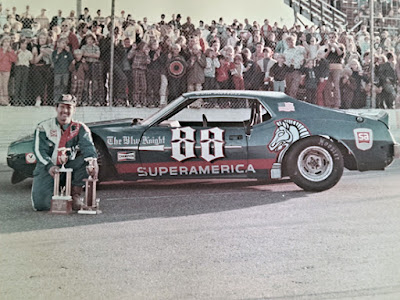 West Salem, Wis. (October 5, 1975) – “She never missed a beat all day,” said Tom Reffner of his 1974 Javelin, which he drove to victory in the sixth annual Oktoberfest 200 feature race at the La Crosse Interstate Speedway on Sunday afternoon.

Reffner, this year's La Crosse Interstate Speedway champion, had his car in tune as he also won the first 50-lap feature in the opening race of the day before more than 4,300 race fans, the largest crowd Speedway owner Larry Wehrs has had.

“This is the biggest crowd we've had in the four years I've owned the track." said Wehrs. “We'll have this race again next year It worked out good."

“It's a growing area and I think it will be a good investment. On a good night they get about 1,000 more people than we do.”

Reffner, starting near the middle of the pack in the 75-lap feature, moved into second place on the 23rd lap. then moved in the front of Dick Trickle of Wisconsin Rapids on the 27th lap and held on for the victory

Ed Howe of Beaverton, Mich., pushed his ‘74 Camaro into second place in front of Trickle on the 36th lap, and challenged Reffner briefly following four caution flags through the final 14 laps

Howe, who won the second 50-lap race, finished runner-up while Joe Shear of South Beloit, Ill., was third in a ‘73 Camaro. Jerry Makar of Ancaster, Ontario, Canada and John Ziegler of Madison were fourth and fifth respectively.

“On the restarts I made sure he (Howe) didn't get under me.” said Reffner.