1969 - Vandiver Wins an Easy One at Talladega 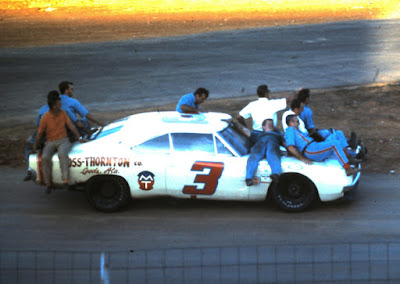 A celebratory ride to victory lane was in order for Jim Vandiver and crew after winning at Talladega.

Running only his third super speedway race ever, the 215-pound Grand Touring graduate romped to a two-lap victory over Ramo Stott, one of ARCA’s top drivers, here Sunday afternoon in his Ray Fox Dodge.

In winning the first Vulcan 500, an ARCA-sponsored event, Vandiver set a new track record for 500 miles at the brand new Alabama International Motor Speedway. Taking a holiday from the NASCAR circuit, Vandiver averaged 156.017 miles per hour and admitted afterwards that he “never really went flat out the whole afternoon.”

The old record of 153.778 was set by Richard Brickhouse back on September 14, when he won the first Talladega 500 in a Dodge Daytona. Vandiver, running his first NASCAR race in that one, finished second. Stott, who had been hanging in the same lap with Vandiver throughout the sunny afternoon, lost his chances for a victory less than 30 laps from the finish - and he lost in the pits when an air hose remained attached to his car as he pulled back into the race.

That made it necessary for Stott to come back in on the next stop and from there his crew had to change tires without an air wrench. Vandiver had it dead-locked from that point to the finish - if not before.

“No, I didn't have too much sweat out there today,” he grinned. “There were no problems on the track and as far as I know we didn’t have any tire problems. I blew one tire, but it was on the third or fourth turn, it was time for me to pit, anyway; and that really didn’t hurt. I just came on in off the fourth turn.”

And there was a big story on the fifth-place car where Tiny Lund, winner of the Permatex 300 on Saturday, finished. Lund, in placing fifth, may have turned in one of his very best races ever. Starting in the second row, the big man from Cross, S. C. first 20 laps, and was running dead last in the field of 41 cars. Among his troubles was a transmission which came apart. The pit crew locked Lund's red, white, and blue Pepsi-Cola car in high gear, and by the 60th lap he had it back into sixth place.

Benny Parsons, ARCA’s defending champion who blew a motor near the mid-way point, relieved Lund near the finish; but it was Lund's spectacular driving that got his car in the top five.

An estimated 28,500 fans turned out to watch Vandiver dominate the race after race leader Don Tarr hit the wall on the 61st lap. Tarr had led for 39 laps before going out, and when it was over Vandiver had led on 132 of the 188 laps needed at the 2.66-mile track for a 500-mile race.