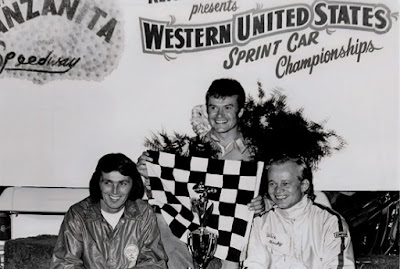 The personable driver piloted the George Nicholson Chevy to victory before an estimated crowd of 10,000. It marked his third try at the event and he became the sixth different winner of the prestigious event that has been tagged as the “World Series of Sprint Car Racing”.

Ferkel, who won the 1973 Pacific Coast Championships at Ascot in the same car, termed his win “a tremendous thrill”. He earned well over $6,000 in cash and prizes, including a new Ford automobile.

Pole starter Rick Goudy, a CRA star from Norwalk, Calif., drove the race of his career in the Bill Pratt Chevy and finished a close second, only two car lengths behind Ferkel.

Bubby Jones, from Danville, Ill., started sixth and finished third in the M.A. Brown Chevy. He trailed Goudy by four car lengths at the checkers in what had to be the most exciting three-car finish ever in the event.

Jan Opperman of Beaver Crossing, Neb., started second and finished fourth in the Swanson Chevrolet, a half-lap back.

The 50-lap event was run with one yellow flag period on lap 2 when IMCA ace Larry Kirkpatrick of Wood River, Ill., was bumped and crowded into the crash wall in traffic just past the start/finish line. His car trailed sparks and stopped at the entrance to the first turn; he was unhurt.

Befitting the wide appeal of the Western United States Sprint Car Championships, the main event fielded 27 cars representing 12 states. A total of 151 entries were received for the event and 130 drivers competed during one of the three nights of preliminary events.