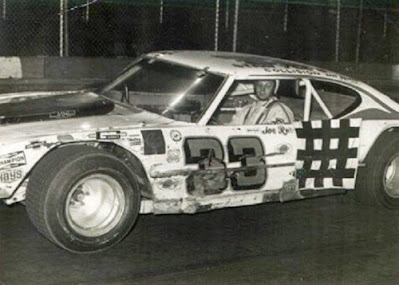 Joe Ruttman
Mansfield, Ohio (October 17, 1971) - Most two-year-old’s have a bottle in one hand and a rattler in the other. Joe Ruttman had a grease gun and gear shift knob.

The other kids had the clean air of a nursery to breathe. Young Joe took in the smell of gas fumes and flying dust.

It showed yesterday. A good driver in a car that refused to allow any of its opponents a passing shot.

When the Ruttman's think of time, pleasure and a livelihood they think of speed. Joe's father was the instigator of it all. He raised three niche in the racing world riches in the racing world as a designer. Another, Troy, who made his name at Indianapolis when he won the 500 in 1952 and then there was Joe.

“Every other man in my family was involved in racing in one way or another,” Joe said. “It was my time, so I got in a car myself.”

“My father tried racing a few times, but found he really didn't enjoy it, so he went to designing and he worked on Troy’s car that won at Indy,” he said. “I’m too old to go into the big time racing now.”

Ruttman powered his late model super stock to victory Sunday in the Johnny Appleseed 100 at the Mansfield Raceway.

“I really had no problems with the car,” he said. “It was prepared very well. So well in fact that it was probably the best running, best handling car in the race. That's why I won.”

There was one spectator who didn't cheer for the Michigan driver as he took the checkered flag, that was his youngest daughter. When asked who her favorite drivers were, she slowly blurted out the names of all her father's competition, but never mentioned him. The race was so exciting to her that she fell asleep shortly after the halfway marker was dropped.

As for that carefully-prepared car that Ruttman powered to victory. In four showings at Mansfield Raceway, it won three times. Every race it has been run at the raceway this season has spelled victory for the #33.

Ruttman received S1,400 for his performance and a four-foot high trophy from Miss Mansfield Raceway, Becky Hoff, in the $8,000 pursed spectacular.

“I didn’t really push too hard at the start of the race,” Ruttman said. “It was just a matter of lining up the cars in front and then passing them.”

Ernie Ward of Mt. Clemens, Mich., a short muscular fellow in a semi-battered yellow racer, was pleased with the performance of the #57 as he rode it to victory in the 50-lap semi-feature, preceding the Johnny Appleseed Classic.

The Mansfield Raceway could boast a longer track for the Appleseed 100. Track officials had the course widened to the turn one and turn two curves, making it possible for a driver to go a half-mile around the circuit in one lap. Becky Hoff, Miss Mansfield Raceway, is the only person at the Raceway this season to be given a trophy and not even run. She was presented with a trophy in appreciation for her reign.

Four states and Canada were represented in the 24-car field of the 100, with drivers from Michigan, Iowa, Ohio, Pennsylvania and Windsor, Ontario. Raceway officials did not announce the crowd size.