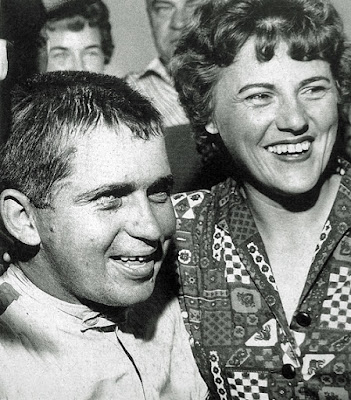 The 26-year-old Californian drove the #3 Racing Associates Special from Indianapolis over the 100 laps on the dirt track at an average of 85.9 miles an hour. His time was 1 hour, 9 minutes and 23 seconds.

Only six of the field of 18 drivers finished the race, the last of this year's USAC competition. Al (Cotton) Farmer of Dallas, Tex., was second and Gene Force of Richmond, Ind., finished third.

Roger Ward, the 1959 Indianapolis 500 winner and this year's top USAC pilot, dropped out on the ninth lap with a burnt piston. He was awarded 17th position.

Tony Bettenhausen was awarded eighth place to move into competition, just 30 points ahead of Johnny Thompson, who sat out this race with an injury.

Bettenhausen led for 15 laps before he dropped out when his car lost Its magneto.