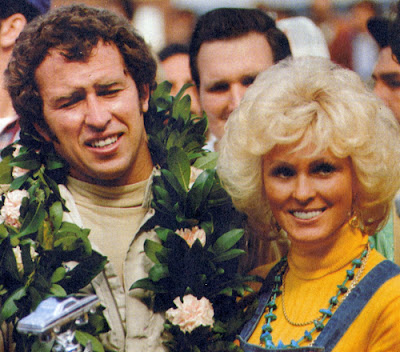 The lightning fast one mile oval was in super-smooth condition, paving the way for record speeds throughout the afternoon.

After qualifying fifth, Pancho set a deliberate pace in the early going, but finished hard to take home over $7,200 of the $30,000 payoff.

With the fairgrounds’ mile in perfect condition, qualifying time trials shattered all existing Syracuse records and Tom Bigelow of Whitewater, Wis., sat on the pole with a new track record of 32.142 seconds, good for a 112 mile per hour average.

Tire wear was feared by many of the USAC teams and several pilots set a slower pace at the start to help tire life. George Snider of Bakersfield, Calif., jumped off the outside pole and took the early lead away from Bigelow. Snider led for 13 laps before being forced into the pits with engine ills. Lee Osborne of Indianapolis, Ind. then took over the top spot and this former area modified pilot from Rochester looked awfully smooth, as he led Bigelow and Bruce Walkup.

The only yellow flag of the entire race occurred when Spike Gelhausen of Jasper, Ind., spun in the second turn on the 17th lap.

John Parsons Jr. of Indianapolis had worked into third after 25 laps, but soon started smoking around the right rear of his car. USAC officials black flagged him for two laps, but then after protests from Parsons crew, pulled in the black and gave him the go sign.

Parsons apparently missed this sign and pulled into the pits to protest his being black flagged. When he did, he ran into one of his crewmen running over to his car. USAC officials then allowed him to rejoin the race, but John lost several valuable laps in the pits and was not a factor in the race.

Parsons, in third place in the dirt standings, could have won the title if he wasn't flagged in and he planned a formal protest to regain his spot.

At the halfway point, several cars were forced into the pits for new right rear tires. This group included Bruce Walkup of Downey, Calif., who was running third at the time. After Osborne had led from lap 14-43, Bigelow's powerful Foyt-Ford powered machine took over from laps 44-51.

Osborne then caught Bigelow in traffic and retook the first position and Gary Bettenhausen had made a beautiful charge up through the pack from his 15th starting spot to take over third. On the 64th lap, Bigelow's A.J. Watson prepared mount again was first, but the motor blew nine laps later to end his run for the big money.

With Osborne out seven laps earlier with fuel pickup problems, it was time for Pancho to move into the top spot and the Dobbins Chevy held it all the way to the checkers.

On the 84th lap, Gary Bettenhausen had his second close call of the afternoon, when Mark Alderson blew an engine in front of him going into the first turn.

Gary slid in the oil and wrapped the wall but did a beautiful job to keep his Santello machine on all fours. Gary, who was seriously hurt here in a bad spill two years ago, held on for second, 12 seconds behind the winner.

This was Carter's first USAC Championship dirt win, but Pancho has won the 1972 USAC midget title, as well as the 1973 sprint laurels. His Dobbins Chevy is owned by Steve Stapp and John Conger and Stapp was the builder, as well as chief mechanic. The winning car was powered by a 330 cubic inch Chevrolet engine. The winner's younger brother Dana, was also on hand, but was one of seven drivers that missed the show with slow qualifying times.

The new policy of allowing campers in the infield for the entire weekend proved to be a big help with attendance and promoter Glenn Donneley was pleased with the announced crowd of 17,500.