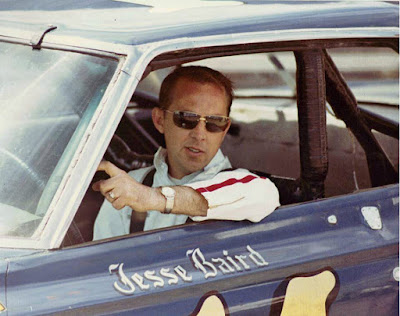 Jack Purcell, a cemetery lot salesman in his spare time, finished second in a ’64 Ford and Jack Bowsher was fifth in another ’64 Ford.

Bowsher, a two-time ARCA champion, was regarded as the driver to beat in the 219-mile grind witnessed by 3,500 windblown racing fans. He was running right on schedule until an extra pit stop to take on tires dropped him from contention.

Baird made but two stops - both times for fuel - and went all the way on a set of tires.

His average speed of 65.685 miles per hour was slowed by 42 laps under the caution flag. He and Bowsher started on the front row after both qualified at 78.175 miles per hour.

Baird had his Pontiac out front for the first 121 laps until his initial pit stop. Purcell took the lead only to lose it to Freeman when he pitted on lap 225. Freeman dropped back for a pit stop 50 laps later, allowing Bowsher to push his white Ford to the head of the pack.

The winner roared back into the lead for good when Bowsher made his second stop on lap 319. Baird took on fuel again at about the 375-lap stage, but Bowsher had to pit at the same time for tires.

“When I still had the lead after the second pit stop, I thought I had the race won,” said Baird, who’s in the auto parts business.

“We’ve got some good equipment although the Pontiac people are out of the racing business,” he added. In all of last season on the ARCA circuit, only one Pontiac saw victory lane in the 35 races with Dick Freeman nabbing that win.

Among the early dropouts in the West Virginia 500 were Junior Spencer in a ’64 Ford and Dick Passwater in a ’64 Studebaker. Jim Cushman had his ’64 Plymouth spin out early but got back into good shape before mechanical difficulties cropped up.