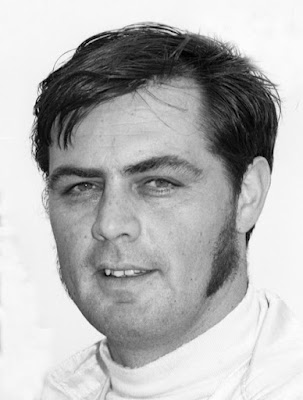 Twenty-four of the nation’s finest super sprints - super modifieds took the green for the 50-lap -chase with Bill Brian of Beckley, West Virginia, taking, the lead going into the first turn. His lead was short lived, however, as Bruce Walkup put the Leyba Sprinter in front on lap 2 with Charlie Masters, another USAC runner, getting by Brian setting the scene for the first 20 laps.

Walkup led until lap 4 when Masters put the Leffler Sprinter into the lead with Walkup right on his tail. They zipped around the ultra-fast oval weaving in and out of traffic at speeds of over 100 miles per hour giving the fairly large crowd some real exciting racing until the 20th lap when they brushed wheels going into turn three, sending both into a hair raising slide that also involved fourth place runner Billy Cassella.

This mishap put Larry Dickson into the lead with Carman second and Brian third. Brian lasted only four more laps when his engine came apart in a trail of smoke giving third to Joe Saldana in the Smith Speed Shop car.

Dickson, driving the Ernie Ensign machine, couldn’t stop the hard charging Union City, Mich., veteran as Carman made his move on lap 33 setting the stage for a dramatic finish. Dickson made a final charge coming out of turn four on the final lap but lost by less than a car length.

Larry Dickson was fast qualifier in the 55-car field with a clocking of 16.293 seconds which is just a tick slower than the record of 16.16 seconds held by Bruce Walkup.