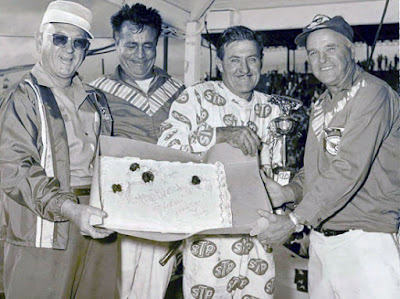 Shreveport, La. (October 29, 1967) – Eight-time IMCA stock car champion Ernie Derr piloted his way to the biggest triumph of his career on Sunday afternoon before a capacity crowd at the Louisiana State Fairgrounds.

It was a big win because Derr scored his 211th career IMCA win on his birthday while using two cars in the contest. He also shattered the State Fair tracks’ 150-lap record.

“I had no idea I would emerge the winner,” commented Derr following the checkered flag being twirled by starter Russ Brown.

Derr started the race in the driver’s seat of his 1967 Dodge Charger which was used throughout the ’67 campaign. However, on lap 19 the car was sidelined with a broken right rear axle. Upon discovery that the mechanism could not be repaired in time for returning the car to the track, Derr flagged Lewis Taylor, the driver of his other car.

And immediately Derr took over the wheel of the '66 Dodge he used in last season’s dash to the 1966 crown.

When Derr returned to action, he was two and a half laps behind the leader, Ramo Stott. But Derr eventually overtook Stott on the backstretch on lap 147 to grab the lead and hold it for the rest of the distance.

Derr erased the old State Fair Speedway 150-lap mark of 1 hour, 10 minutes and 44.25 seconds set by Stott in 1966. The winning time on Sunday was 1 hour, 7 minutes and 8.17 seconds. The victory paid Derr $500 and it also enabled him to claim big bonus currency to be awarded with his eighth national title. He becomes the first stock car driver anywhere to nail down eight national thrones. The win also jumped Derr to the nation’s #1 position in stock car racing as its biggest winner.

Stott would take runner-up honors and cash in on $400 and finish second in the point’s chase behind Derr.

Derr commented after the race that the brakes on his second car were almost gone when he got behind the wheel.

State Fair observers hailed the race as one of the most thrilling since stock car racing entered the exposition program back in 1950.

Stott led the first lap and Darrell Bradley was ahead on the second. Derr moved ahead on lap 3 but was sidelined with axle trouble allowing Stott to build up a mile and a half lead before taking over Taylor’s cockpit.

When Derr returned to the track, he was in fourth position.

Stott made his mandatory 30-second pit stop on the 100th lap with Derr pushing ahead.

Derr wouldn’t comment on his age except that he’s like Jack Benny. He said he was 39 years of age.