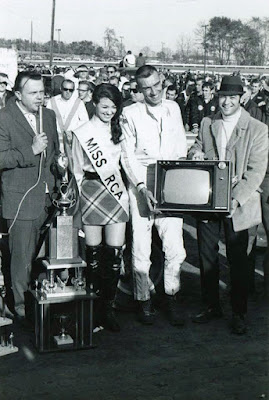 The “Coraopolis Comet” became the first two-time winner of the event and garnered $1,840 plus extras for his stellar effort.

Adamson gunned into third place on lap 12, took second on lap 14, and passed Lou Blaney of Hartford, Ohio, the 1966 winner, coming out of turn four on the 17th circuit for a lead that proved to be permanent.

Blaney, $250 richer after he set a track record of 24.04 seconds in qualifying, on Saturday night, started on the pole and withstood early challenge from Frank Gorichky and Ralph Quarterson.

Winner of 33 features in the western part of Pennsylvania this season, Quarterson was well back in the pack when the checkered flag came out as a result of engine problems.

Blaney held on for third and Gorichky, off West Middlesex, Penn., got fourth-place money as both drivers failed in their efforts to stave off a determined bid by Lynn Paxton for the runner-up spot.

Paxton, who started 14th, moved into third-place on lap 62, passing J.D. Leas of Steubenville, Ohio, then overhauled Quarterson while moving through the third turn in the outside groove of lap 69.

A yellow flag on lap 77 allowed Paxton to close in on Adamson, but Bobby quickly opened up a five-car-length lead on the restart and held it until the finish.

There were 77 cars on hand for time trials.