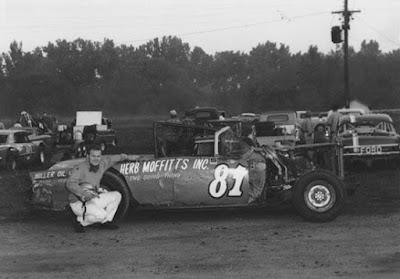 Boone, Iowa (October 18, 1970) - Greg Davis of Boone won the Tri-State 100 at the Boone Speedway Sunday. It was his second big win there in the last three weeks as he won the season championship two weeks ago.

Three Boone drivers at one time or another held the lead during the race in which 24 cars started. There were only 13 left on the track at the end of the race.

Arlo Dorenbush held the lead for the first 20 laps until Arnie Braland finally slipped around him after riding him bumper to bumper from the beginning.

Braland then held the lead for 15 laps until his water hose broke and he had to take his Chevy into the pits. This gave Davis the break he was looking for as he then grabbed the lead and held it for the next 56 laps. His victory was worth $400.

Davis also took second in the time trials with a clocking of 18.09 seconds. Denny Hovinga of Laurens had the fast time of 17.68 seconds.

Braland won the second heat after taking the lead from Jim Cowan of Marshalltown who demolished his car after he hit the wall in front of the grandstand. There were 11 cars that started this heat and only five finished.