Opperman, driving “Speedy” Bill Smith’s Chevy, chased pole-sitter Larry Kirkpatrick of Wood River, Ill., before passing him on the far turn of lap 14. He won by a third of a lap over Kirkpatrick and Ray Lee Goodwin of Kansas City.

Opperman would win his second straight feature on February 9 but didn’t have an easy time of it. Duane “Pancho” Carter Jr., of Huntington Beach, Calif., who smacked the wall and caused a restart on the first lap, challenged Opperman from start to finish, even appearing to having a wheel in front at times. Experience prevailed, though, and Opperman pulled away in the final laps. Carter, who had the crowd on its feet with his hard-charging style, finished second while Jay Lyle, Warrensburg, Mo., came in a distant third. 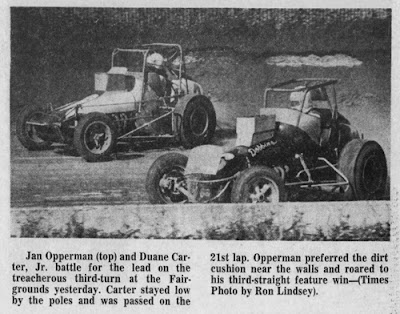 Opperman would make it a clean sweep on February 10, winning his heat, match race and the 30-lap feature. But that wasn’t all – he set a new record in winning his heat and the match race. The only thing he didn’t win was the grandstand. That went to Duane “Pancho” Carter Jr., who once again worked his way in front of Opperman for a couple of laps, much to the delight of the 5,633 in attendance.

Unfortunately for Pancho, the track dried a bit and both Lee Osborne and Jay Lyle slipped by the young hot shoe to finish second and third, respectively, while Carter settled for fourth. Heat winners were Kirkpatrick, Opperman and Kenny Weld, Kansas City. Opperman won the match race and Lee Osborne won the consolation.

Kramer Williamson, a virtual unknown from Mechanicsburg, Penn., and competing in his first Winternationals, started on the pole, and led all 30 laps to score the victory ahead of Jan Opperman on February 13. But it was Duane Carter Jr., who stole the show again.

Ray Lee Goodwin, the 1972 IMCA national champion, set fast time and easily won the match race. But his hopes for a feature win were crushed after only one lap when Duane Carter lost control of his car on the front straight and Goodwin hit him. “I just made a mistake,” Carter said. “I tried a different groove and Ray Lee hit me.” Goodwin was finished but Carter’s car was undamaged. He restarted from the rear of the field.

Williamson was first pushed by Bubby Jones of Danville, Ill., until Jones exited with mechanical problems. Opperman took over where Jones left off and challenged Williamson but didn’t have the stability to keep up through the turns.

Meanwhile, the crowd-pleasing Carter roared from the back of the pack, getting by Larry Kirkpatrick for third place on lap 12 and then passing Opperman five laps later and making his bid for the lead, much to the delight of the fans. By lap 25, he pulled right up behind Williamson and threatened to take the lead. But with only three laps to go, the bottom of Carter’s radiator fell out, and he pulled out of the race. 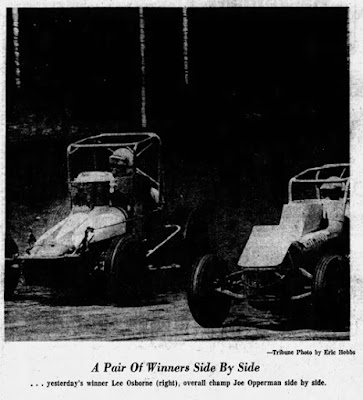 Lee Osborne won the battle, but Jan Opperman won the war as the Winternational Sprint Series came to a close on February 16. Racing before a near capacity crowd of 6,600, Osborne won the 50-lap finale, but it was Opperman with enough points to claim the overall title.

Bill Utz, Sedalia, Mo., who came from last position twice, once at the original start, and once on a restart after an accident, finished an impressive second while Ray Lee Goodwin was third. Goodwin protested afterwards that Utz didn’t go completely to the rear of the field, but IMCA officials ruled otherwise.