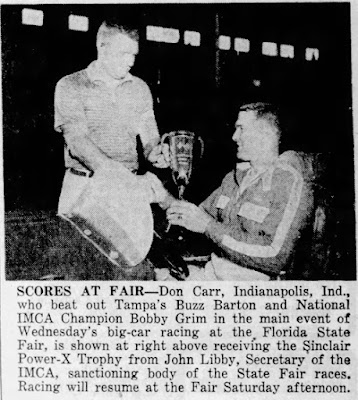 Tampa, Fla. – Don Carr, an Offenhauser jockey from Detroit, Mich., won a disputed 15-lap feature in the International Motor Contest Association season opener of the Winternational Sprints at the Florida State Fair on Wednesday, January 30. It was a race that sent some 4,000 race fans home arguing the virtue of Buzz Barton’s claim to victory.

Barton, of Tampa, and the sentimental fan favorite, was listed as second place, according to IMCA officials, although that depended on one’s opinion of where the finish line was.

As Carr and Barton entered the straightaway on the last lap, Barton made his bid for the lead position. He flashed in front of Carr at the point where the time trials had been clocked. But starter Johnny Hicks had already waved the checkered flag some 50 feet back, at a spot where he had told the drivers in a pre-race meeting that was where he would stand for the feature race.

Bobby Grim of Indianapolis, the two-time IMCA champion, finished an undisputed third, several car lengths back of the two leaders.

Besides the wild feature finish, the first buzz of the afternoon came from Jim Packard of Indianapolis, when he took the Sachs Hall out in front of seven Offenhauser's and set a new track record for six laps over the half-mile clay oval. His time of 2 minutes and 51.86 seconds cut down the mark of Fred Nelson set in 1952 of 3 minutes and 2.90 seconds.

Other heat winners were Chuck Marshall of Champaign, Ill., in a Mercury-powered car and Red Amick of Muncie, Ind., in an Offy. Barton won the match race made up of the four fastest qualifiers and Bud Randall of Fairmount, Ind., was the consolation winner.

The turns were rough, and the straightaways slick and it ended up a bad day for Grim, the Indianapolis driver who's married to a Tampa girl. He salvaged one honor, turning the fastest lap in time trials, at 23.25 seconds.

Grim was riding along comfortably in second when a spin brought out the yellow flag. On the restart, Barton flashed by him, which set up the controversial late-race showdown between Carr and Barton. 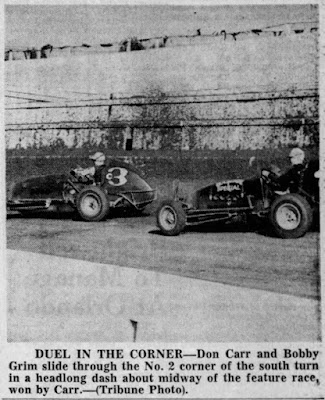 A crowd of 8,700 watched Carr win his second straight feature on Sunday, February 2, beating Bobby Grim in the 20-lap “Gasparilla Championship” at the Florida State Fairgrounds. While no records were set on the track, the masses filling the concrete stands, the aisles, and the temporary bleachers, made it the biggest assembly ever to gather for the Winternational Sprints.

The feature race was a two-car affair between Carr and Grim from the first turn. Carr took the lead right away at the drop of the green and was still there when the Johnny Hicks’ checkered flag dropped. Grim charged at Carr at every opportunity, and while his Black Deuce was sticking in the corners, he couldn’t get enough bite on the straightaways to make a pass on Carr and the Helms Offy.

Carr and Grim started lapping slower cars by the seventh lap and the two lapped the entire field except third-place finisher Bud Randall. In spite of the torrid pace set by the duo, (9:27.78) they were still seven seconds off the Grim’s own track record, set in 1955.

Lee Drollinger of Champaign, Ill., who had a bad day with spinouts, made it worse by jumping Amick after the finish of one of the races. The combatants were separated, and a $10 fine was slapped on Drollinger for “conduct unbecoming a race car driver”. 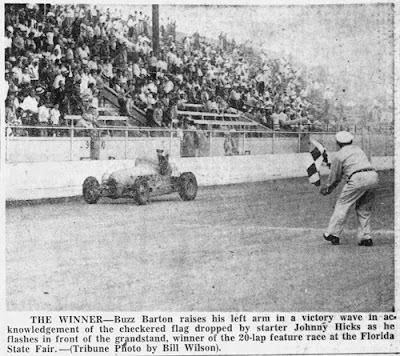 It was Buzz Barton’s turn to win a disputed race and he did just that, pushing the Dizz Wilson Offy to the 20-lap feature win over Don Carr exactly a week after their controversial finish, Wednesday afternoon, February 6. Although the race was hot, the dispute this time was mild and the 4,000 in attendance were hardly aware of the protest lodged by Carr’s car owner, Speedy Helms. Barton’s stablemate, Bud Randall, finished third in the other Wilson Offy.

Barton, the chunky Tampan, also won the match race. Red Amick, who won a heat race in the two previous programs, added another on Wednesday as did Jim Packard in the Sachs Hall. Pete Folse won the third heat in the Buckner Offy.

The 8-lap consolation went to the aging Bert Hellmueller of Louisville, Ky., in his four-wheel Ranger. It was exciting day for the “Kentucky Colonel” as he hit the wall and spun out in the third heat, came back to cop the consolation, and finished an impressive fifth in the feature.

The quickly settled disputed revolved around a caution flag thrown during the main event after Folse spun on the south turn. Carr claimed Barton passed him during the slowdown period, which was against the rules. IMCA officials ruled that Barton had passed Carr earlier during green flag racing and was awarded the victory. Carr had the lead until the disputed lap 14 when he hit the north wall but recovered in time to prevent Barton from squeezing by.

Meanwhile, Grim was trying the outside, then the inside to get by Barton in the first nine laps, only to lose third place to Randall when he became a little too careless on the north turn. There, Randall slipped by Grim, and a lap later rode up on Barton’s car in a charge to the front. Randall’s car hit a rut, sending his car high into the air but he came down straight and continued on without a bobble.

Bobby Grim would hit his champion stride when the fourth and final leg of the Winternational Sprints wrapped up on Saturday, February 9. Grim won the 25-lap finale in a walkaway and set a new track record in winning the first heat.

The IMCA champion had the sympathy of the crowd of 6,000 after going winless in the first three meets but the final day was a triumph that not only satisfied his fans but garnered the Frank Luptow Memorial Trophy as a permanent fixture for his trophy case at home.

Other heat winners beside Grim were Bob Tattersall, and Vic Ellis. Barton won the match race and Bert Hellmueller won the consolation.

The feature hadn’t even got started when a push truck ran up over the wheel of Fritz Tegtmeier of Elgin, Ill., just missing the driver’s head. The truck reared up and passed over Tegtmeier’s car with both right tires.

Once the race started and the pace slowed to a mere hurricane speed, Grim jumped out front right away and was never threatened. By the eighth lap he had started lapping the field and by the 10th circuit, he had a quarter of a lap lead over Carr. Even with an almost unbeatable lead, Grim continued to drive with a heavy foot and won by half-a-lap, lapping everyone up to the fourth-place finisher, Bud Randall.

It was a merciless Grim who won the first heat and set a new track record. Taking a big jump at the green flag, He kept his foot hard on the gas pedal and turned seven laps in 3 minutes and 10.97 seconds, wiping out the old mark of 3 minutes and 11.99 seconds set by Marvin Pifer of Adrian, Mich., last year. 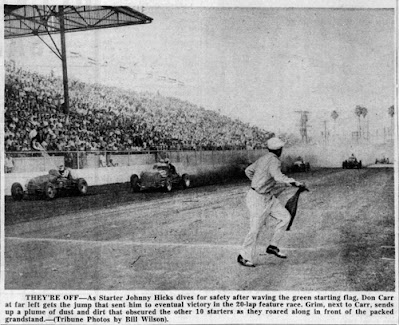