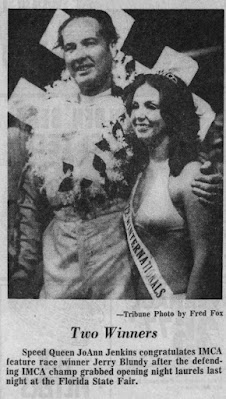 Tampa, Fla. – The defending IMCA national sprint car champion, Jerry Blundy of Galesburg, Ill., kicked off the 52nd annual Winternational Sprints with a victory in the inaugural 25-lapper at Plant Field on February 2.

Eddie Leavitt of Kearney, Mo., jumped out to the lead in the 25-lap main event but made an unexpected appointment with the wall in the first turn on lap 9. Blundy, who had started fifth, and was running second at the time, inherited the lead and despite some smoke coming from the car in the last few laps, took Johnny Hick’s checkered just ahead of a Bob Kinser of Bloomington, Ind., and Bill Cassella of Weirton, W.Va. Blundy said afterwards a broken torsion bar was the cause of the smoke.

Heat wins went to Ron Perkins on Des Moines, Iowa, Jan Opperman of Hayward, Calif., and Doc Dawson of Lima, Ohio. The match race went to Kinser, and Ray Lee Goodwin of Kansas City won the consolation. Opperman set a new track record for eight laps in the second heat when he won in the time of 3 minutes and 37.89 seconds.

Jan Opperman, described by Tampa Tribune sportswriter Bob Smith as the “long-haired hippie,” out of Beaver Crossing, Neb., won the second leg of the Winternational Sprints on February 5, capturing the 30-lap feature, and thanking the Lord for the strength to finish the race.

“I give credit to the Lord,” Opperman said from victory lane. “I like to witness for Him. He sure has changed my life.” He needed the strength after his car began acting up only six laps from the finish. The car, Opperman remarked, “was beating me to death.”

To the fans, Opperman seemed in complete control after taking the lead on lap 6 from his 11th starting position, and then stretching it twice more when yellow flags appeared, bunching the field for restarts.

While Opperman rode serenely in the lead, Jerry Blundy and Chuck Amati carried on a dogfight for second and third. Amati finally got the advantage as Blundy dropped back but with two laps to go, track announcer Jim Riser sang out, “Oh, there’s something wrong with Amati.” He had run out of fuel.

Bob Kinser of Bloomington, Ind., and Bill Cassella of Weirton, W.Va., moved past to finish second and third, respectively, while Blundy settled for fourth.

Amati was effective in winning the first heat, coming from his fourth starting position. Opperman won the second heat while Bill Utz of Sedalia, Mo., scored the victory in the third heat. Cassella won the match race and Blundy took home the win in the consolation. 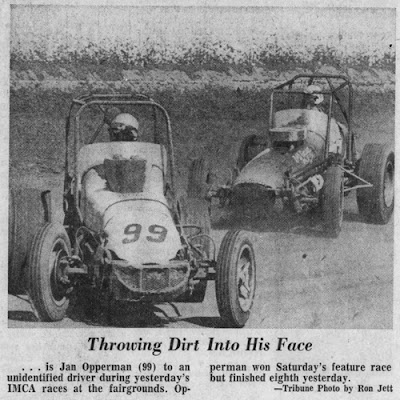 Everything went wrong for Jerry Blundy when the third leg of the series took place before 7,800 race fans on February 6 – everything but the finish.
There were several false starts at the beginning, including one that caught Ron Fisher in the middle of bunching traffic that caused the Kansas City driver to roll his sprinter five times.

The field charged off of turn four onto the front stretch for the start of the 30-lapper, but starter Johnny Hicks caught a signal from assistant Woody Brinkman that the cars were not ready and withheld the green flag. The front cars started braking and those who followed squeezed up, caught Fisher’s car, and sent it into a series of rolls.

Shaken but unhurt, Fisher said, “I must have rolled five or six times, it just happened so fast.”

Once the race was restarted for the last time, Blundy tried to catch race leader Ralph Quarterson of Sharon, Penn., by riding the rim. But the track had dried, the surface was slick, and the groove was at the rail, not the rim. Blundy’s tire setup was for the cushion at the top of the track, but once he gave up on the top side and came down low in the corners, he started narrowing the gap between him and Quarterson.

By the eighth lap, he was challenging and on lap 14, slipped by Quarterson when he got trapped behind a slow-moving LeRoy Felty.

Once in front, Blundy had things going his way. After the race, he gave away everything but his cash winnings. He gave his victory kiss from Ms. JoAnn Jenkins to his buddy, Bill Utz.

He finished ahead of Ray Lee Goodwin of Kansas City and a hard-charging Chuck Amati.

It was a fast track for drivers who liked the inside groove. Two records were set – Perkins won the second heat in 3 minutes and 55 seconds and the 6-lap match race won by Quarterson ended in a time of 2 minutes and 42 seconds. Bob Kinser set fast time in qualifying, turning the half-mile in 25.370 seconds.

Billy Cassella would win the 50-lap main event on February 12 before another stellar crowd of 7,442. Cassella led from start to finish but gave the brush-off to speed queen JoAnn Jenkins when she offered a victory kiss.

“I just don’t go for that,” growled in explanation.

It was a long race, with seven caution flags slowing the pace but each time on the restart, Cassella would pull away and continue his domination.

In the final two laps, Ray Lee Goodwin and Jerry Blundy snuck up on Cassella’s bumper but could not get past, settling for second and third, respectively.

While there wasn’t much action at the front, Chuck Amati kept the crowd on its feet with his charges from the rear of the field twice. The first time he blew a tire and almost wrecked. But he changed the tire and came charging back out. Seven laps later as he was running in sixth, he got into the wall, brought out the yellow again, then rejoined the race, again at the tail of the field. He passed car after car and worked his way up to fourth, only to have his car unglued when he a broke a torsion bar. He would eventually finish seventh.

Opperman, Bob Kinser, and Clifford Jans of Evansville, Ind., were heat winners. Blundy won the consolation and in a novelty match race, Millard Newman of Tampa won the 5-lapper in a 1911 Rolls Royce. 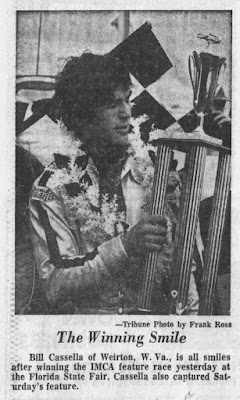 It was a repeat performance the next day, February 13, for Cassella as he won the 30-lap finale, again leading start to finish. A paltry crowd of 2,500 witnessed the action as the curtain fell on the ’72 Winternational Sprint Series.

The feature race was the calmest of the five races, caused by a narrow groove that limited passing. Cassella admitted afterwards that the groove was indeed tight.

“I could only run in one spot,” he said. “There wasn’t any reason to move out it to find another place to run.”

Even Jan Opperman, who isn’t afraid to take risks to get by a fellow competitor, was content with following Cassella after making several attempts in the early going but settled back to claim second place. Ray Lee Goodwin was third and Jerry Blundy took fourth.

On Saturday he had scorned to kiss the race queen and drew a gasp from the grandstand when he pushed her aside as she offered him a victory kiss. This time he greeted JoAnn Jenkins a little more warmly and accepted a handshake.

In victory lane, Cassella posed for several photos while waiting for Blundy, the overall Winternationals champion, to show up but Blundy had already departed for the airport, heading back to his home base in Galesburg, Ill.

Ron Perkins led from start to finish to win the first heat, Cliff Cockrum of Benton, Ill., won the second heat, and Steve Schultz of Chillicothe, Mo., took the third heat. Chuck Amati was a double winner, charging from his sixth starting spot to win match race and also won the consolation.