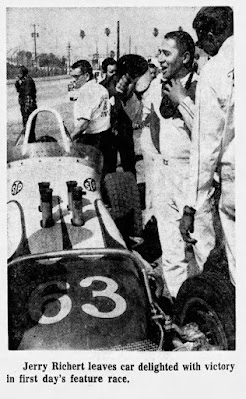 Tampa, Fla. – The five-event IMCA Winter National Sprints in February of 1968 would prove to be a two-man show as Bobby Adamson of Coraopolis, Penn., and Jerry Richert of Forest Lake, Minn., would split a pair of features at the Florida State Fairgrounds’ half-mile with Adamson, in his first trip down south, winning the overall title.

Richert, a three-time IMCA national sprint car champion, would win the series’ opener on Wednesday, February 7, winning the 30-lap feature and collecting $600 on a dusty afternoon at the Fairgrounds.

A gamble on the last restart proved to be the difference for Richert. The gamble was Richert could take the high road and fortunately there was just enough weight to the dirt to give him the acceleration to power his Frank Wagner Chevy past Jerry “Haircut” Lepinski of St. Paul, Minn.

Lepinski, the fastest qualifier at 27.86 seconds on the half-mile, settled for second while Dick Sutcliffe of Greenwood, Mo., took third. Ralph Parkinson Sr. of Wichita Falls, Tex., and Gus Linder of Pittsburgh would round out the top five.

Happy about the win, but not too pleased with track conditions, Richert said after his victory that he would, “sure like to see them let us use knobs so we could show the fans the way the races use to be”. 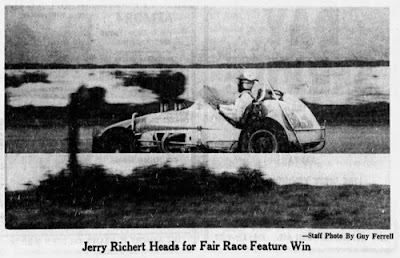 Richert would find the track to his liking again three days later, February 10, as he scored his second straight IMCA sprint car win. With a little better racing surface, Richert was winding the half-mile so tightly that he actually turned in times three seconds faster than the quickest laps turned in previous time trials.

At the end of the 30-lap event, Richert had a straightaway advantage over second-place car Gus Linder, the Pittsburgh flash, who had worked his way from his seventh starting position. Pole-sitter Jerry Lepinski took third followed by Bobby Adamson and Darl Harrison of Tiffin, Ohio.

Richert started on the inside of the second row and quickly drifted to top of the track, where he turned loose every horse in his engine. He was in front, going down the backstretch and after that it was just a case of who was going to finish second.

There would be a close call when a caution flag would come out on lap 17, costing Richert his quarter-lap lead. Starter Johnny Hicks, thinking the track was clear, waved the green and the field charged towards the first turn, only to find two tow trucks still parked there. Richert narrowly avoided the trucks and when coming back down the homestretch, shook an accusing finger at Hicks for almost costing him the race.

Richert, Karl Busson of Toledo, Ohio, and Don Nordhorn of Mitchell, Ind., were heat winners Earl Halquist of Sidney, N.Y., won the consolation.
Bobby Adamson, who brought a great set of credentials with him on his first trip to Tampa, had a little “Lady Luck” to win the 30-lap feature on Sunday afternoon, February 11.

Adamson took the checkered with Jerry Richert charging at his tailpipes, and Ray Tilley right behind him.

Time trials turned everything topsy turvy, putting some of the favorites out of contention early. The fastest single lap was recorded by Richert at 27.22 seconds with Bill Roynon of Tampa second fastest at 27.24 seconds.

Roynon would take the lead at the start of the feature and once he was settled in, took the middle of a very narrow groove on the track. Richert would attempt to pass Roynon on the straights but was never able to get the nose of his car more than even with the rear tire of Roynon’s. As Roynon was receiving starter Johnny Hick’s cross flags signaling the halfway point of the race, the crankshaft on Roynon’s car broke.

As Roynon’s sprinter swerved, he nicked Richert, who swung to the outside on the backstretch and Adamson shot through on the inside to take over the lead. That was the end as far as the race was concerned. The groove was too narrow for anyone to pass on and Adamson cruised to victory.

“It looked to me that Jerry bumped him,” Adamson said, describing the incident afterwards. “Jerry swerved to the outside to avoid hitting Bill and I got past him on the inside. If Jerry had gotten in front right then, I would have never been able to get by him. The groove was just too narrow.”

It was a relatively quiet race day, lacking the flurry of spinouts like the first two days of racing. The quick development of the narrow groove provided little passing. Once the green flag waved and the cars cleared the first turn, they settled in, and the race took the shape of a parade.

The only race that Adamson or Richert wouldn’t win would be the fourth event on Wednesday afternoon, February 14. Benny Rapp of Toledo, Ohio, normally right at home on pavement, showed ‘em he could win on dirt as well in winning the 30-lapper and a $600 paycheck.

It would be another dusty and rough afternoon for the drivers as the dry, rough surface would eliminate some of IMCA’s top sprint car stars. 1967 IMCA national champion Karl Busson, Buzz Barton, Wayne Reutimann and Bill Roynon weren’t even fast enough to qualify for the main event.

The 40-year-old Rapp would start on the pole, but it was two-time winner Jerry Richert jumping out to the lead from his outside starting front row position and leading the race for the first 15 laps. A broken drive line would send Richert to the pit area, giving Rapp, who had been choking on Richert’s dust, the top spot. Rapp stayed there without much challenge the rest of the way.

Gus Linder, who had passed more cars in the four meets to date, would finish second followed by Ralph Parkinson Sr, Bobby Black of Middletown, Ohio and Ray Tilley of Clearfield, Penn.

The tricky half-mile proved many a guesser wrong as it started out fast but ended up slow.

A filthy, dirty Rapp complained that he couldn’t see through the clouds of dust in the turns. In fact, the dust throughout the whole program became so bad that the consolation had to be red flagged after one lap and the water wagons would be sent out to re-water the track. The moisture wouldn’t last long, and the race had to be cut from 10 laps to 8. 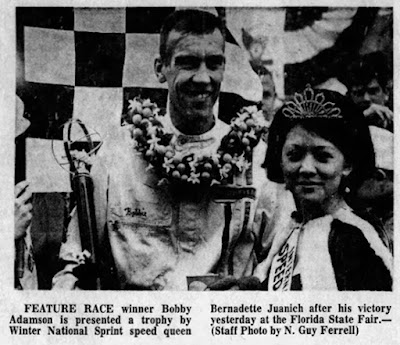 The injured drivers were Ralph Parkinson Sr. and Hank Smith of Mt. Ayr, Iowa, both flipping on the second lap of the main event.

The wipeout of the first two cars in the feature put Jerry Richert in front of the field at the start where he would lead the first four circuits. Gus Linder would pass Richert on lap 5 and lead the next four laps before Adamson, who started in 11th, powered past him for the lead, and was ahead to stay for the remaining 40 laps.

It had been a slow start to the day for Adamson, who turned in poor times in qualifying, so he had to start a little farther back in the field. But his wheels were shod right before the feature, and he was able to blow by cars in what was his own private groove on the topside of a near-perfect track.

Al Sweeney, president of National Speedways, Inc., credited track superintendent Joe Aiken with finding the solution on the last day of racing. Water was applied all night and then three tons of calcium chloride was spread to keep it wet and dust free. Probably something today’s promoter wouldn’t be able to get away with.

Sweeney said total attendance for the five-day meet was 38,592, 105 below 1967’s all-time record attendance, but Sweeney mentioned that it was 10 degrees cooler than the previous year.