But the popular driver had to earn his starting position in the main event the hard way, winning the consolation after failing to qualify through his heat race. It was a full day of successes for Richert, who went out and set fast time with a trip of 26.01 seconds.

Last year, Richert jumped from IMCA to USAC (United States Auto Club) for the first part of the season but returned in time to chase down the title in IMCA for the second straight year.

“The boss was nice enough to let me give it a try,” Richert said. “This year I’m sticking with IMCA. I’d like to win that title for the third straight year.”

He explained that part of the issue with competing in USAC was getting time off from his job at Whirlpool. “You had to compete in all of the events to make progress and I just couldn’t risk taking all that time off and losing my 15 years of seniority.”

Two chargers from neighboring Midwestern states kept the fans on their feet with a nerve-racking battle for the runner-up spot. The last 10 laps saw Jim Moughan of Springfield, Ill., and Dick Gaines of Mitchell, Ind., flip-flop positions several times with Moughan finally getting the upper hand. 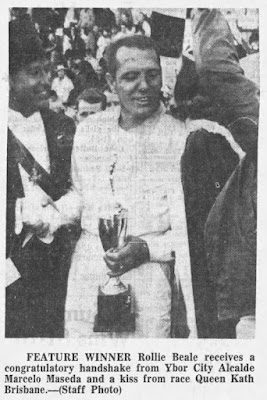 Rollie Beale, a handsome 35-year-old from Toledo, Ohio, making his first-ever appearance at the Florida State Fair, won the 25-lap feature on Saturday, February 5. In what was described as one of the weirdest races ever seen on the half-mile dirt.

The feature saw five caution flags wave to clear the track of spun cars and minor accidents. The field took so many pace laps that most of the field had to make a pit stop to take on additional fuel.

Finishing second was Bill Puterbaugh of Roxana, Ill., who held the lead for several laps and third was Tom Bigelow of Whitewater, Wis.

Jerry Richert, the leader through the first 10 circuits, went out of the race with a blown engine and almost caused a pileup when he suddenly through his hand up, signaling he was through, and slowed sharply as he entered the pit area in the first turn.

Cars went around both sides of him, with one smacking his rear tail, and several others heading for the outside wall when the dust thrown up wiped out all vision.

Richert proceeded around the track slowly again, then leaped from his still rolling car right in front of the pit area, his feet bathed in hot oil. He said he wasn’t hurt but more anxious about the condition of his car.

Jerry Blundy, Gordon Woolley and Jim McCune of Toledo, Ohio, also brought out yellow flags in which they all smacked the outer wall.

Meanwhile, Beale continued to sail along in front, building up a lead, losing it on the restart, and then re-building it again. At the finish, he had a 12-car length margin Puterbaugh as he was waved home by the checkered flag from starter Johnny Hicks.

Al Sweeney, president of National Speedways, Inc., said it was the first IMCA-sanctioned victory for Beale, who obviously like the taste of victory.

“I got a little braver than usual,” Beale grinned from winner’s circle. The groove was a little weird, with a low groove on the south side and a high groove on the north side. When I passed (Puterbaugh), I gambled and took the high side on the south turn (going out of the groove), but it worked.” 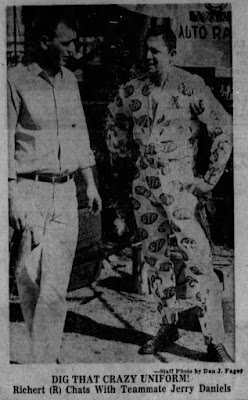 Richert would come back strong for the third leg of the Winternational Sprints, Sunday, February 7, winning his second feature of the series but it didn’t come easy.

The final two laps of the 30-lapper saw Gus Linder bumping the defending IMCA champion on the backstretch and jabbing at him from the inside and outside on the turns. Despite the challenge, Richert managed to hold on for the victory.

Richert brushed off the bumping incident lightly when questioned in the winner’s circle.

“He tapped me a little bit,” he explained. “I didn’t have any trouble. The car was working a little worse near the end of the race. And those caution flags hurt me. To build up that big of a lead and then to lose it under caution.”

Linder, surrounded by even a bigger swarm of fans, said he had the power to get Richert with his 289 cubic inch Ford engine.

“A few more laps and I think I could have taken him,” he said. “I picked out the north turn to make a pass and I was going to try on the outside on the next time around. The fourth turn was the best spot, I just ran out race. It was over.”

The Pittsburgh driver was starting only his second sprint car race of his career. “I won that one,” he remarked. “I came from last place.”

Linder’s experience is driving super modifieds in Pennsylvania, using the same car with a top that can be quickly fitted and removed. He turned the entire grandstand into his own personal cheering section as he worked his way from his 14th starting position in the 16-car starting field. He put on a show in the middle laps with Gordon Woolley, bumping wheels several times before Woolley got sideways and smacked the wall. He suffered a broke tie rod and retired.

Richert led all but the first lap of the race. At the start, he punched the gas pedal and the rear wheels refused to grip on the just-watered racing surface. Jim McCune went out front for one lap before Richert reclaimed his position to stay. 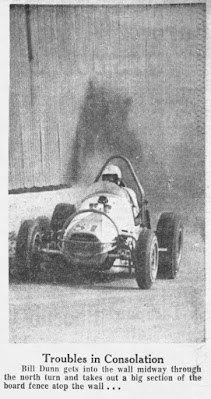 Richert would be out for a Sunday drive on Wednesday, February 9, as he scored his third feature victory of the series, easily winning the 30-lap main event while the rest of the field struggled through six caution flags.

Each time the field bunched behind him on a restart, Richert sped away to a healthy lead. He was about 10-car lengths ahead of runner-up Jim McCune when Johnny Hicks dropped the checkers. Finishing further back was Jerry Blundy, Gordon Woolley, and Gus Linder. The fourth program of the series drew a crowd of 5,817.

Although there were dozens of spinouts and Bill Dunn of East Prairie, Mo., took out a section of fence in a flying leap at the wall, the only injury was to the tiny daughter of Tom Bigelow. She was jostled off the top of a trailer in the infield during one of the races and had several stitches taken in her head at an area hospital.

“Only one more to go,” Richert said after receiving his trophy. “That track was like pavement out there. It was the kind of track where you have to let the car do the work. You can manhandle a car on a rough dirt track, but not this one.”

Just then, McCune rushed up to explain how he rammed Richert from the rear on one of the restarts.

“I hit the brake and the car kept going,” he said, half explanation and half apology. Richert grabbed him by the neck and wrestled in friendly fashion as a sign of forgiveness. 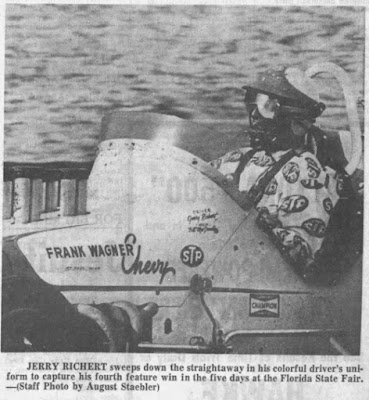 Richert would put an exclamation point during the Winternational Sprints’ finale on Saturday, February 12. He ran away with the 50-lap main event, his fourth such victory in the five-race series, and he picked up $800 for the win. He also earned the title as Winternational Sprints champion for 1966.

Saturday’s race drew 9,513 fans, the largest closing Saturday ever at the Fair, and the five days of racing attracted 38,697 paid attendees, an all-time high.

Richert started on the pole position and finished in front, never once giving away his lead. He wheeled it so easy that it looked to be his best ride of the series, though he said it wasn’t as much fun as it was winning on Wednesday.

“Things weren’t working as good as they did on Wednesday,” Richert said, after receiving his trophy for winning the feature and the Pepsi -Cola trophy as the Florida State champion.

“They tried to make the track heavy for this race, but it didn’t work out that way. I had to take it easy and couldn’t hoof it in the corners like I would have liked.”

“It sure was wonderful being back in Tampa again after missing last year,” he said. “I want to come back again next year.”

So, the defending IMCA champion is off to a good start for his third national championship.

Jim Moughan finished second to Richert, seemingly satisfied to take second place on a greasy clay racing surface. Moughan also ran second to Richert in the 10-lap consolation. Finishing third in the event was Rollie Beale, the only driver to grab a feature win in the series beside Richert. His car was smoking badly in the late stages of the contest and as he caught the checkered flag, the car belched a greasy cloud.

The hero of the day was Dave Lundy of Monroeville, Penn., who got his first chance to start in a feature race during the five-day meet. He had a poor time trial on opening day and was never a starter.

Saturday, he got his chance and climbed from his 20th starting position in the feature and finished an impressive fifth behind Jerry Blundy. He was the most active passer in the field.