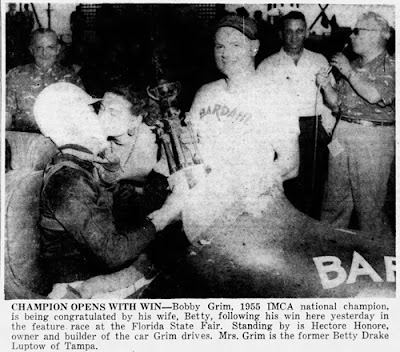 Tampa, Fla. – Bobby Grim would kick off the 1956 IMCA season and the Winternational Sprints with a 15-lap feature win at the Florida State Fair on Wednesday afternoon, February 1.

It wasn’t a walkaway win for the defending IMCA champion as the Indianapolis speedster since he trailed Don Branson of champaign, Ill., for the first eight laps and then took over the lead when Branson dropped out of the race because a fouled spark plug. Grim and Branson raced bumper-to-bumper until Branson was forced to quit, with Grim lacking the horsepower to get by his husky rival.

Grim also won the match race, nosing out Jim McWithey of Anderson, Ind., and finished second to Marvin Pifer of Adrian, Mich., in the first heat. Pifer set a new track record in winning the heat, winning the 7-lap race in the time of 3 minutes and 11.99 seconds, breaking the old record of 3 minutes and 15.44 seconds held by Eddie Adams.

In the second heat, McWithey nosed out Ken Rubright of Lyndon, Ill., Johnny Pouelson of Gardena, Calif., ran away from the field to win the third heat. Bob Cleburg of Rio, Wis., won by the length of a car over Indianapolis’ Bob Wright to win the consolation.

Grim would make it two in a row, winning the 20-lapper on Saturday, February 4, before a stellar crowd of 7,000 spectators, the largest crowd ever to witness auto racing at Plant Field. Grim took start Johnny Hicks’ checkered with nearly three-quarters of a lap margin over runner-up Marvin Pifer. Johnny Pouelson was third.

Winners of heat races were Harry King of Detroit, Ken Rubright and Buzz Barton of Tampa. A 4-lap match race was won by Jimmy Campbell of Oak Grove, Mo.

The rain on Friday gave the drivers excellent grip on the narrow Fairgrounds’ half-mile, although the going was rough for anyone attempting to make a pass. Grim was cut over the right eye after being hit by a chunk of clay in the first heat.

But it didn’t affect his driving in the feature. He started on the pole position and was off to the races as soon as the green flag dropped, never seriously challenged. Pifer drove a hard but smart race but was never able to pull up on Grim to attempt a pass. He settled down to his second-place position and seemed content to stay there for the remainder of the race.

Pouelson was the surprise of the race. Jumping into a strange car after his own was scratched because of mechanical trouble, he shook off every attempt by other drivers to get by and stubbornly hung on to his third-place position. 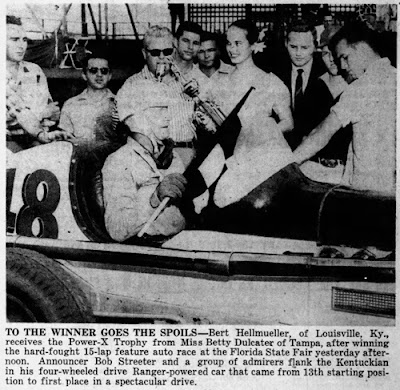 Engelbert “Bert” Hellmueller would be the surprise of the of the afternoon, Wednesday, February 8, as he not only won the 8-lap consolation but pushed his four-wheeled driver Ranger to victory in the 15-lap main event over a field of Offenhauser's.

The “Kentucky Colonel” had taken a look at the Florida State Fair half-mile earlier in the day and announced that it was “my kind of track.” Then he went out and proved his point and won by 10-car-lengths over Don Branson and Bobby Grim. Hellmueller’s win on the hard-packed and slick racing surface snapped Grim’s two-race winning streak.

The 3,500 in attendance were treated to sone spectacular racing because of the tricky track. More than a dozen cars tangled with the wall and each other.

Jim McWithey took a clod of clay in the nose in the second heat that almost knocked him out cold. Harry King received some facial cuts in a crash with Johnny Pouelson on the final lap of the feature.

On a day when passing was at a premium, Hellmueller came from his 11th starting position to take the lead on lap 11, passing the slipping and sliding Offenhauser's with relative ease. His four-wheel drive Ranger, the only one of its kind on the circuit, rode smoothly through the turns and was able to get a quick bite coming into the straightaways.

The first four laps of the feature were a see-saw battle between McWithey, Branson, and Grim. At one point, McWithey bumped Branson, tagged the wall, and literally jumped into the lead. For the next few laps, he used his right rear wheel as a wall bumper going through the turns and caroming off the walls to straighten his car out going into the straightaways.

Bobby Grim would come back strong for the final day, February 11, and win the 20-lap finale and clinch the Winternational Sprints crown for 1956. A crowd of 4,000 braved the threatening weather.

A heavy track took its toll on drivers and their machines. Of the 29 cars to start the program, only 15 were still running at feature time. But in spite of the heavy surface, the track was hard and fast for the last two events and the powerful Offenhauser's were having issues as they gunned out of the turns.

Grim won in front of Don Branson and Don Hutchinson of Kansas City, all driving Offenhauser-powered cars. The time of the race was a 10 minutes and 6.48 seconds, slowed by three caution flags. Branson gave Grim a good run in the early stages of the race, but the defending IMCA national champion took over for good on lap 3. After that, he lengthened his lead every lap and finished about a quarter of a lap out front.

After that, Branson and Hutchinson made it a battle for second place and Jim McWithey and Johnny Pouelson hooked up to battle for fourth with McWithey getting the nod.