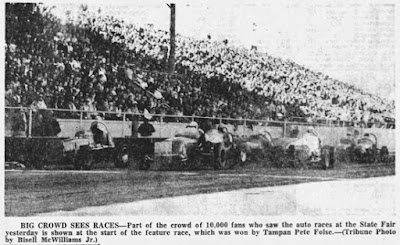 Tampa, Fla. – After two false starts in his heat race that put him in the consolation to qualify, Pete Folse of Tampa, the 1960 International Motor Contest Association champion vindicated himself before a capacity crowd of over 10,000 by winning the 20-lap feature on the opening day of the Winternational Sprints at Plant Field on Sunday afternoon, February 11.

Folse took a back seat several times that afternoon, first in time trials, when he was timed second fastest behind Jerry Blundy of Galesburg, Ill., who had the best time of 27.75 seconds. During the first heat race, he jumped the start twice, where he was sent to the back of the starting field. After failing to finish in the top four in his heat, he was forced to qualify for the main event through the consolation, which he won handily.

Barton was the hard luck driver of the feature. He started ninth and worked his way up to second and was quickly closing in on Folse with only a few laps to go when his motor started shutting down. He started dropping back in the field and eventually finished fifth. He later found that his fuel line was clogged.

Late in the afternoon, the clay was piled high enough in the turns to give the Offenhauser’s some bite into the loose stuff for traction. Folse rode the outer rim all the way and was coming out of the final turn onto the straightaway with his rear wheels almost halfway around.

Richert made a fine recovery from a poor start. He started on the inside of the second row but quickly dropped back to seventh before the first lap was complete. From there it was an uphill battle to regain lost ground and place second.

Dick Hope of Tampa made a favorable impression with the hometown crowd by winning the first heat. Johnny Rutherford of Fort Worth, Tex., won the second heat, Sonny Helms of Carlisle, Iowa, was the third heat winner. The Armstrong trophy dash went to Jerry Blundy.

Dick Gaines of Mitchell, Ind., electrified the crowd during time trials doing three fast snap rolls going into the first turn and continuing with a fourth roll that tore out a 12-foot section of wood fence. The car was demolished with a broken frame and twisted wheels, but Gaines came through without a scratch. 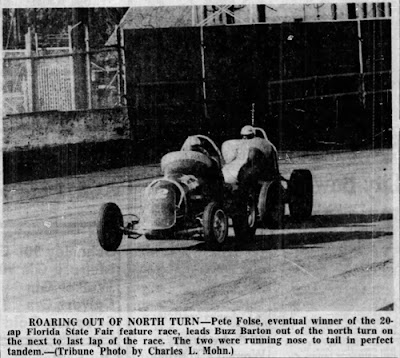 Folse and Buzz Barton would raise a few neck hairs in their next battle on Wednesday, February 15, before 4,800 fans. The two Tampans, both driving Offenhauser's, licked a hard, slick track that threw them a racing curve in every event. Folse came out of the feature winner and Barton was second by the blink of an eye.

Folse used loose dirt, switches in tires and experience in winning the 20-lapper and the second heat. In the heat he went up into the loose clay at the top of the track to get a bite from the slightly wet dirt, but later in the afternoon found that same clay had turned to dust, so he came down and hugged the inside.

After watching the consolation race, Folse switched tires for the feature and drove the corners tight like a midget pilot. Barton, who worked his way from his tenth starting position, by sticking his wheels under car after car, couldn’t get a wheel under Folse.

On the final turn coming out of the north curve, Barton made one last bid to get by Folse, going wide into the corner in a boardslide, but he started his slide too soon and killed his speed coming down the straightaway.

The time for the feature was 9 minutes and 49.52 seconds, due partly to slick track and also a yellow flag that slowed the field for two laps.

Gordon Woolley of Waco, Tex., won the first heat over Johnny Rutherford, both driving Chevy’s. Folse broke from his eighth starting position to second position in a sweep through the first and second turn and was up to first coming out of the fourth turn to score an easy win in the second heat. Hank Rogers of Bayside, N.Y., won the third heat ahead of Sonny Helms. Leroy Neumayer of Compton, Calif., won the 5-lap trophy dash and Jerry Blundy was the consolation winner.

A glass slick track and some tricky maneuvering provided the 8,200 fans in attendance some thrills as Buzz Barton manhandled the Lempelius Offenhauser to a 25-lap feature victory on Saturday, February 18.

The win came after a brush of wheels between then race leader Pete Folse and Barton as the green flag waved on a late restart. Folse slipped from first place to fourth in recovering from the partial skid his car was thrown into when Barton hit his left front wheel and knocked the dust cover off the wheel hub.

Leroy Neumayer and Jerry Richert, both in Offenhauser's, slipped past Folse during the skid, and finished second and third, respectively, eight laps later. Folse would recover to finish a close fourth.

“Pete knows I didn’t do it on purpose,” Barton said to Hector Honore, car owner of Folse’s car. “It was just one of those things.”

Honore inspected the damage to his Offy and explained that Folse was not looking for the green flag to be thrown at that time and was caught completely by surprise.

“There was a tow truck still on the track,” Honore said. The two truck was clearing the track following a tangle between Jerry Blundy and Harold Leep of Wichita, Kan., that did little damage to either car.

There were dozens of spinouts during the program, one that almost caught starter Johnny Hicks in a slide directly in front of the grandstand.

Barton would win the first heat using the same tactics he used in the feature, charging hard on the straightaways, and ducking to the inside to squeeze by his competitors. In the feature, he came from his eighth starting position to the front, taking one car on each lap. In the heat, he was even quicker, moving from his third starting spot to first in only two laps, taking cars on the iron-hard north turn.

Folse took to the outside of the track to win the second heat while Jerry Shumaker of Wichita, Kan., was the third heat winner. Jerry Richert won the trophy dash and Leroy Neumayer took home the consolation victory. 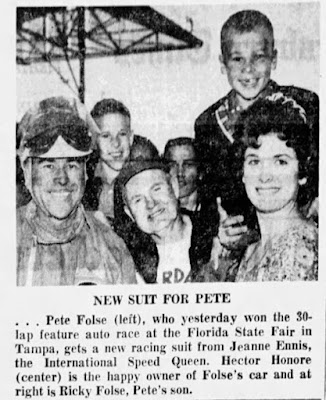 Folse would close out the four-day stand of the Winternational Sprints, winning his heat, the 30-lap finale and claiming the overall point title for the Florida State Championship on Sunday, February 19.

In the main event, Folse was so far out in front of the rest of the field he was almost a forgotten man in the race. He finished a full quarter of a lap over Jerry Blundy.

The attention of the 7,200 spectators was focused on the battle for third place, between the stubborn Leroy Neumayer and the even more stubborn Buzz Barton.

The position of the first three cars were set after the first lap and rode that way the rest of the race. Barton, starting back in the ninth position, charged like a bull going at a matador to the fourth spot.

Barton would bump Neumayer several times, but the latter refused to budge. After running nose to tail in a rough struggle through the 21st lap, Barton backed off and kept his position until the checkers waved.

Upon reaching victory lane, Folse would spring out of his car, point to the three oil spots on his shiny boots and good-naturedly complain to car owner Hector Honore about keeping his “office” clean.

The trophy dash was run after the feature because of a threat of reports of rain close by. A reporter asked Folse if he wanted to run in the 5-lap race matching the four fastest cars, even after winning the 30-lap feature. 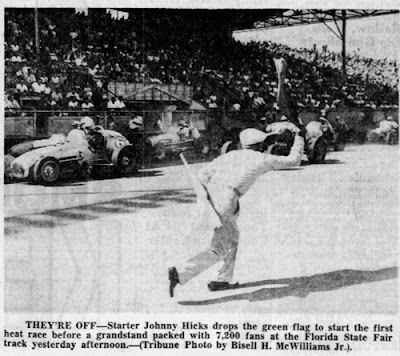