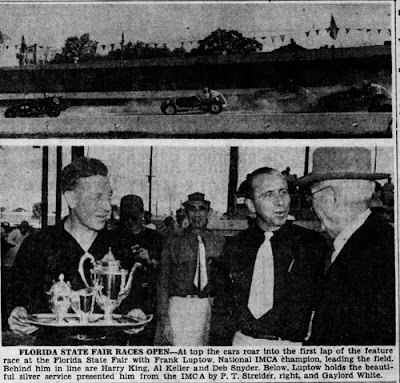 Tampa, Fla. – Frank Luptow, Tampa’s IMCA champion, made a clean sweep of the Winternational Sprints opener at the Florida State Fair on Tuesday, January 31. Luptow opened the defense of his International Motor Contest Association crown, as a crowd of 4,000 watched his smooth performance on the half-mile clay track.

Putting his Black Panther Offy through its paces for the first time since he had checked it over at the factory, Luptow turned the fastest lap in time trials (26.91 seconds), won the first heat, and then breezed to victory in the 12-lap main event after a rough start.

The rough start was caused by Harry King of Detroit, driving the Sherk Offenhauser. King attempted to outjockey Luptow even before starter Jerry Marlatt dropped the green flag. King decided to make the race personal, slapping wheels together down the grandstand straightaway, attempting to bluff Luptow on the start.

But it was Luptow who called King’s bluff, got the jump when the green waved, and roared away from King and the rest of the field to take the lead. Finding the groove quickly, Luptow stayed out front for the full distance, while King was forced to contend with the wild antics of Al Keller of Buffalo, N.Y.

Keller, who won the second heat in the Hukle Ranger, gave King fits on every turn, taking the topside of the track and repeatedly brushing the wall as he attempted to get by King’s Offy. On the 9th lap, Keller rammed into the rear of King and seemed to lose ground after that.

In addition to Luptow and Keller, Deb Snyder of Kent, Ohio, was the other heat winner. Red Redmond of Atlanta, Piloting the Franklin Hal, won the 3-lap match race and Jimmie Mayes took the Libby Ranger home the winner in the 8-lap consolation.

Luptow would make it two in a row, winning the 12-lapper on Saturday, February 4, before a capacity crowd of 7,000. Once again, it was Luptow and Harry King making the main event their own personal feud.

Luptow wasn’t as dominant as he was in the opener, beaten by inches in the first heat by Pancho Alvarez of Tampa in the Canal Zero Ranger. King, on the other hand, won the second heat quite handily. Red Redmond won the third heat and Iggy Katona of Azalea, Mich., took the 3-lap match race driving the Buckner Offy. Wayne “Speed” Wynn of Tampa was victorious in the consolation.

The expected fireworks between Luptow and King failed to explode and Luptow got off to a good lead as the green flag waved. King held on to Luptow’s rear bumper throughout the distance and several times was even with Luptow in the turns, but the Black Panther would show its power on the straightaways and despite King’s persistence, Luptow was a comfortable four car lengths out front at the checkers.

Finishing behind the two leaders was Katona, Redmond and Homer Claytor of Tampa. The time for the 12 laps was 5 minutes and 53.89 seconds. 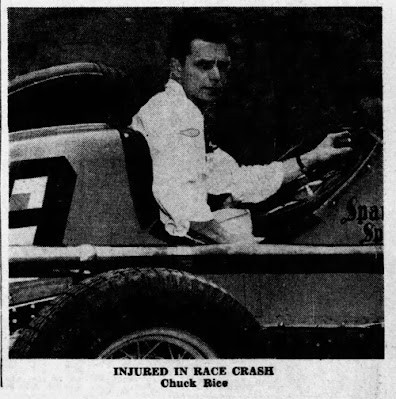 Luptow would win the third and final race of the Winternational Sprints on Saturday, February 11, but unfortunately his victory would be overshadowed by a spectacular four-car pileup that critically injured Chuck Rice.

The 37-year-old father of five children was pulled from his car and rushed to a Tampa area hospital with a skull fracture, broke shoulder, and facial lacerations. He was placed in an oxygen tent and his condition was listed as “critical.”

The wreck came at the start of the consolation race as the field roared down the front straightaway, heading into the first turn. Eddie Adams of Bradenton hooked his wheel into the rear of a car driven by Don Carr of Detroit and went into a skid. Adams’ car careened into the Rice’s, pushing his car into the wall, spinning him into the air, and then bumping him again, to send his twisting car into a series of rolls.

Rice had been coming to Tampa for several years, racing at both Plant Field and nearby Speedway Park. His wife and children had just arrived in Tampa a few days before and were witness to the crash.

Luptow had plenty of trouble keeping in front of Harry King and his Bud Sherk Offy as he had trouble finding good traction on the hard-packed, smooth clay half-mile oval. King rode the tailpipe of the champion all the way and was less than a car-length at the checkers. Red Redmond was a distant third, Al Keller was fourth and Joe “Pancho” Alvarez rounded out the top five. Time for the race was 5 minutes and 23.03 seconds.

With his dominating performance in all three programs, Luptow was crowned 1950 Winternational Sprints champion.

Editor’s Note: Chuck Rice would remain at Municipal Hospital in Tampa, listed in “critical condition” throughout February and upgraded to “poor condition” in March, and undergoing several surgeries to relieve pressure from his brain. He would leave the hospital and return home in early April, unable to move his right side and confined to a wheelchair.