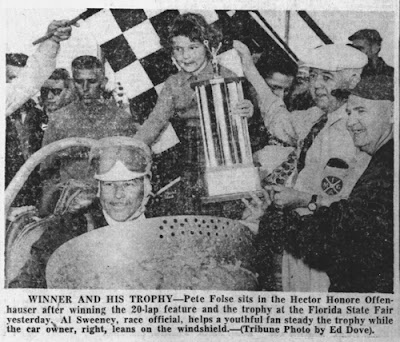 Tampa, Fla. – The 1960 International Motor Contest Association racing season opened with a bang at the Florida State Fair on Wednesday, February 4, with Tampan Pete Folse making the first defense of his circuit title, winning the opening day feature of the Winternational Sprints in the Hector Honore Offenhauser before a crowd of 4,500.

The bang was provided by two drivers who collided with each other and the grandstand wall, halting the scheduled 15-lap main event on lap 13 with Folse sailing safely along in front of the field.

Jerry Shumaker of Wichita, Kan., one of the drivers involved in the spectacular crash, was taken to a local hospital with a back injury, and the other driver, Jerry Richert of Forest Lake, Minn., was treated at the track with minor cuts.

The Shumaker car lost a wheel and part of the front end when Richert climbed over his car while the two drivers battling for position. Shumaker collided with the wall while Richert’s car entered the first turn smoking badly.

Folse exhibited the combination of a heady driver wedded to a beautifully prepared machine as he not only won the feature but turned in the fastest time, 28.03 seconds, on the half-mile clay track.

Buzz Barton, another Tampan, whose always accepted the challenge of the walled Plant Field, was second in the feature and Jerry Blundy of Galesburg, Ill., was third.

Heat wins went to Richert, Dale Reed of Wichita, Kan., and Barton. Folse also won the 5-lap match race and A.J. Shepherd of Gardena, Calif., who fought with his car all afternoon, gritted it out and won the 10-lap consolation.

Folse made sure of his victory in the feature by jumping out front in the first turn, followed closely by Barton. Through the first five laps, Folse continued to increase his lead until the race was halted on the 13th circuit. On the restart, Folse pulled away again and was comfortably in front when the checkered flew.

Folse would make it two in a row when the IMCA big cars returned for the second program of the Winternational Sprints, on February 6. For the 9,500 in attendance, the Saturday afternoon races were almost a repeat of the series opener, with Folse winning the 20-lap feature and the Armstrong trophy dash as well as placing second in his heat.

Folse took the “Black Deuce” around the tire-scarred half-mile under a leash, feeling his way on the turns lap after lap as the groove changed. He was well in front of second running Jerry Blundy and A.J. Shepherd finished third, both drivers in Offenhauser's.

The excitement of the feature came when Johnny White of Warren, Mich., slashed viciously into the outer wall coming down the front straightaway and then spun down to crash the inside wall while cars dodged on either side. White was stunned by the bone-rattling impact and slumped over the steering wheel for several minutes after the car came to rest. White would be uninjured, but his car was demolished.

White’s crash came midway through the feature, stopping the clock and preventing Folse from getting a time for his 20 laps of work. The restart forced him to rebuild the healthy lead he had over the rest of the field. 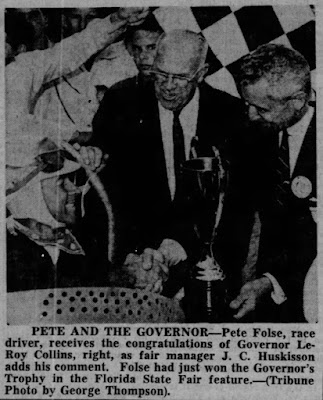 Folse would capture his third straight feature win of the Winternational Sprints on Tuesday, February 9, winning the 20-lapper with some smart driving on the half-mile clay. With a crowd of 4,800 looking on, Folse quieted the scream of the Bardahl Offenhauser to a purr and rode the inside rail to the triumphant wave of the checkered flag.

Second-place finisher Parnelli Jones of Torrance, Calif., chose to hug the rail and the bumper of Folse’s car the entire way but wasn’t able to get a look at first place. Well back of Folse and Jones was Buzz Barton claiming third.

The slick track gave warning during hot laps when Hugh Randall of Louisville, Ky., took his car out and washed out the front end of a wall. After that spectacle, every mechanic in the pit area was seen rushing to change their “knobby” tires to flat, wide “slicks”.

Folse was also seen about an hour before race time walking around the track, testing the softness and looking for any weak spots. There was no weakness, though, the dirt was packed and bound tight like asphalt.

Starting on the pole position, Folse never wavered out of the thin groove. Jones stayed quietly behind him for the first 11 circuits as the two drivers pulled away from the rest of the field, then began tail riding Folse through every turn, waiting for the defending IMCA champion to make a false move.

After the race, Jones commented, “I couldn’t even get a wheel through, he had it pinched tight.”

After the race, Jones was treated for a badly burned left leg, suffered when he blew a water hose on opening day.

Folse received congratulations from Florida governor LeRoy Collins after the feature – and the governor, unknowingly, walked off with Folse’s reward, the checkered flag. Folse still had the Governor’s Trophy. 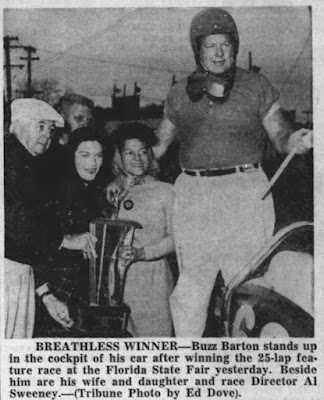 The Winternational Sprints series finale would see Buzz Barton snap the three-race winning streak of his fellow Tampan, easily winning the 25-lap capper on Saturday, February 13, in the Ker-Mac Offenhauser.

Folse, hoping to set a precedent with four straight feature wins, had to be satisfied with second place, although he finished the four-race meet with enough points to clinch the Florida State championship and gave him a great start on his second IMCA national championship.

Although Folse got a great jump at the start of the 25-lapper, he lost it on the 20th go-round, and gave up ground steadily for the remaining five circuits. Even so, he was well in front of third-place finisher A.J. Shepherd at the finish.

Somewhat winded from wrestling his car, Barton had little to say after his car pulled up to victory lane. “I kept after him. That was all. I just kept after him.”

Folse’s comment was that he had the wrong tires. “I had knobbies on the rear end and after the sixth or seventh lap, I couldn’t get them to stick,” he said. “That doesn’t take anything away from Buzz, he’s a great driver and deserved to win.”

Some beautiful driving was demonstrated by Herschel Wagner, who started the race in 12th and finished in the fourth spot, just a few feet behind Shepherd.

Probably the most remarkable thing was of the afternoon was the luck of promoter Al Sweeney, who put the race on despite the presence of storm warnings and was able to finish the six-race program without interruption.