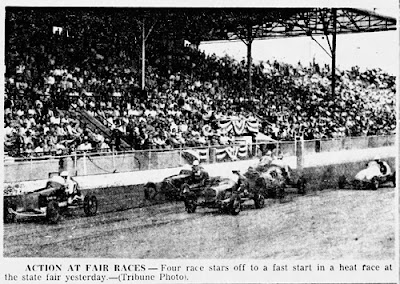 Tampa, Fla. – A heavy track proved difficult for quite a few drivers as the Winternational Sprints kicked off on Tuesday, February 6, but Deb Snyder of Kent, Ohio, was up to the occasion and walked off with top honors in the 8-lap feature at the Florida State Fair.

Rains all day on Monday and early Tuesday morning held the crowd to a mere 2,500. A few hors of sunshine would have put the track into top racing form but the clouds intervened and gave the drivers a muddy, rut-filled racing surface that proved troublesome for most.

Snyder started on the outside front row and immediately opened up a comfortable lead. Pete Folse of Tampa, driving the Buckner Offy, stayed close for the first few laps but his smaller motor couldn’t plow through the heavy stuff fast enough to stay in contention. He seemed content to ride it out and finished six car lengths behind Snyder. Leon Hubble of Linton, Ind., who started fourth in a Ranger, finished even farther back in third.

Finishing fourth behind that trio was the “Mystery Driver,” complete with black mask and uniform, driving the Telese Offy. The anonymous driver also won the 6-lap first heat and although many of the fans thought his driving style was very familiar, he was chauffeured to his car just before every event and then quickly whisked away so no one had an opportunity to identify him.

Bert Hellmueller, the “Kentucky Colonel” from Louisville, would win the shortened 10-lap feature on Saturday, February 9, in a program highlighted by two spectacular crashes.

A turn-away crowd of over 8,00 watched as Eddie Adams of Tampa ride up the wall on the north turn of the 10th lap in the main event and flip end-over-end twice as his front wheels dug into the clay. The car was upside down as it came to a rest and Adams was pinned underneath for several minutes before help arrived. Miraculously, Adams suffered a small cut on his hand.

In the Australian Pursuit race, Fred Nelson of Minneapolis, Minn., hit the wall in the same spot and performed a double end-over-end much like Adams did. He also emerged from his car unhurt.

Hellmueller had a length and a half lead over who else? The Mystery Driver at the time of Adams’ flip and starter Frank Winkley waved the checkered/red flag signifying the end of the scheduled 12-lapper. Adams had been riding along in third when he crashed.

Hellmueller took command of the race on the first turn, moving in front of Deb Snyder from his starting position on the outside front row. Snyder held the pole position after turning the fastest lap in time trials with a time of 26.14 seconds.

Adams got by Snyder on the first lap and the Mystery Driver on the second lap as the Snyder started to slowly drift back. On the third lap, the Mystery Driver would squeeze by Adams on the inside to regain second place and that was the way they rode until Adams’ flip.

The Mystery Driver pulled up Hellmueller’s rear bumper in several bids to take over the top spot, but the race was halted before he had the opportunity he seemed to be waiting for.

Adams made the clay fly in his win in the first heat. Pete Folse won the second heat in a spectacular finish, coming off the fourth turn to edge Speedy Eichhorn by a nose. Fred Nelson, the driver who flipped in the pursuit race, made a runaway of the third heat. Adams starred in the 5-lap trophy dash and Hellmueller won the consolation.

Deb Snyder would show championship form during the Winternational Sprints finale on Saturday, February 16, roaring to victory in the 15-lap feature and leaving an impression on the 4,500 in attendance that they had seen the International Motor Contest Association champion for 1952.

Finishing behind Snyder was Bert Hellmueller, Pete Folse and, of course, the Mystery Driver. The time for the 15-lap feature was 7 minutes and 8.74 seconds, an average of 28.53 seconds per lap.

The Ohio speed ace gunned into the lead on the first turn and opened up a substantial lead after the first lap. He widened that lead lap after lap and only let up on the gas pedal late in the contest when it was apparent that no one in the field was going to give him any trouble.

The battle was really for second place between Hellmueller and Folse. Folse tried gamely to get up on Hellmueller’s rear bumper several times, but he failed to outfox the wise old “Kentucky Colonel.” Hellmueller pushed hard during the race and refused to swing wide in the turns, allowing Folse and opportunity to move by.

Snyder would win a special match race between the four fastest cars and finish second to Leon Hubble in the first heat. Pete Folse and Fred Nelson were the other heat winners while Bob Carpenter won the consolation.

The most thrilling event of the afternoon was a special All-Florida race which was won by Iggy Katona of Azalea, Mich., and Tampa. It was not Katona, however, but veteran driver Benny Alvarez that drew the crowd to its collective feet. He led the way for six laps in his little Ford-powered car, fending off a flock of Rangers and Offenhauser's.

Displaying superb driving skills, Alvarez shook off repeated challenges from Katona but finally tired on the next to last lap and lost out to the much younger driver. Folse finished third and the Mystery Driver was fourth.

Eddie Adams, the Tampa driver was not allowed to compete in the finale. Promoter Frank Winkley ruled him ineligible because of rough driving in the February 9 program.

With his two victories, Deb Snyder claimed the overall points title for the 1952 Winternational Sprints.