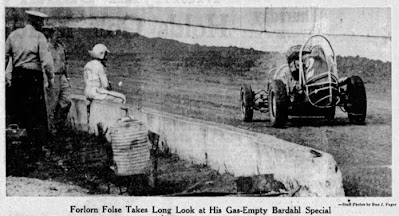 Tampa, Fla. – Gordon Woolley of Waco, Tex., won a stirring 25-lap feature on the opening day of the Winternational Sprints on Wednesday, February 9, without knowing the checkered flag was meant for him.

He rode across the finish line thinking that Pete Folse was so far ahead of him that he couldn’t see the finish of the race. Folse, however, was sitting on the backstretch with a dead car after leading every lap but the last one.

“I didn’t know I had won,” an elated Woolley exclaimed, climbing from his car. “I didn’t know until I went around on the parade lap and saw Pete sitting there. I knew there was car sitting on the backstretch, I would have never guessed it was Pete.”

A puzzled Folse climbed from his race car as a crowd swept across the infield shouting questions. The answers were, “I don’t know what went wrong. I wasn’t getting any fuel. No, I don’t think I ran out of gas.”

Several minute later, he found out from owner Hector Honore that the fuel pump had been jolted loose from the Offenhauser engine by jarring holes on the rough half-mile track.

Jerry Richert of Forest Lake, Minn., driving an Offenhauser, finished second and Jerry Blundy of Galesburg, Ill., was third in another Offy.

Heat races were won by Folse, Johnny White of Warren, Mich., the 1962 IMCA national champion in a Offenhauser, and Jigger Sirois of Shelby, Ind., in a Chevy. Richert won the 5-lap match race and the 10-lap consolation.

The race drew a record 10,554 fans, about 500 more than last year’s all-time high. They filled the grandstands, bleachers, and swarmed the infield, keeping police officers busy shooing them out of the pit area.

Folse built up a half-lap lead in the early going, lost his advantage due to a restart caused by a spinout, and was three-quarters of a lap ahead of Woolley when his car coasted to a stop on the backstretch. He had passed all but two of the starting 18 cars.

It was a tough break for the three-time IMCA champion, out to retain his title but he shrugged it off with a quiet comment, “That’s part of racing.”

It took some time for Wooley before he realized he was the winner. He stood breathless in the middle of the crowd that surrounded his car and tried to answer questions. Someone handed him the trophy and he started to hand it back, then it hit him that it was his trophy, and he was the man the photographers were shooting.

He admitted that he was afraid that at one time he would not be able to finish the race.

“The motor was heating up,” he explained. “I dropped down to the inside and got out of the loose stuff and it cooled down. The whole front end is clogged with dirt, the radiator is full of it.” 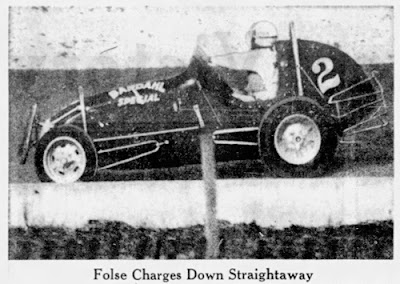 It was a happy, grinning Folse on Sunday afternoon, February 10, when he climbed out of his Bardahl Black Deuce, the winner of the 25-lap feature. Receiving spontaneous hugs and kisses from women and hearty handshakes from men, it was happy contrast to the season opener.

It was a well-earned victory for Folse, who made four attempts to get by Herschel Wagner of Hickman Hills, Mo., to take over the lead in the late stages of the race. Wagner held on to take second with Jerry Daniels of St. Paul, Minn., coming across the finish line in third. Both Folse and Wagner were in Offenhauser’s, and Daniels was driving a stock-block conversion Chevy.

Twice, Folse almost flipped his car as he attempted to drive around Wagner on the high side of the south turn. “I couldn’t cut in to go down the chute,” he said. “Every time I tried to cut down, the front end dug in. I finally came through the turn and went down the backstretch on the outside.”

Folse would make it two in a row when the IMCA sprint cars met again for the third leg of the Winternational Sprints on Wednesday, February 13. But it was anything but easy for the “Flying Frenchman.”

The four-time Florida State champion and three-time IMCA king jumped to the lead in the first corner and roared away from the pack. About three-quarters through the race, Bob Hogle “kissed” the wall in the north turn and starter Johnny hicks was forced to dig out the yellow flag.

When the race finally resumed at peak speed, Folse wound up the 20-lapper by passing almost everyone in the field. 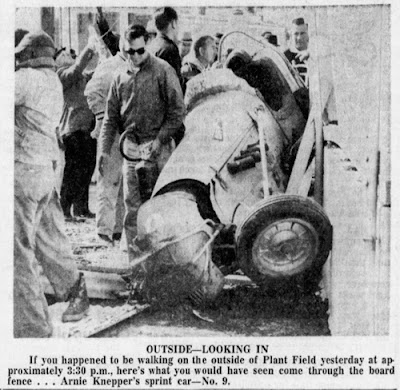 The match race was called off after Arnie Knepper of Belleville, Ill., taking over Herschel Wagner’s mount, created a big draft in the infield by taking out a large section of the south wall when his steering arm broke and he made a “sudden right-hand turn.” Knepper walked away with some bruises.

To most of the slim crowd, Folse’s feature victory looked like a Sunday afternoon pleasure ride on an empty highway. But Folse said he worked harder in this race than he did Sunday when he made three attempts to get by Herschel Wagner.

“I worked awfully hard in the feature,” Folse said. “I didn’t have to worry about passing anyone, but the track was kind of funny. It looked good but it wasn’t. I got crossed up on the backstretch several times and almost lost it. I was as slick as greased glass.”

That fourth turn was awfully rough,” he continued. “I just kept bouncing around.” 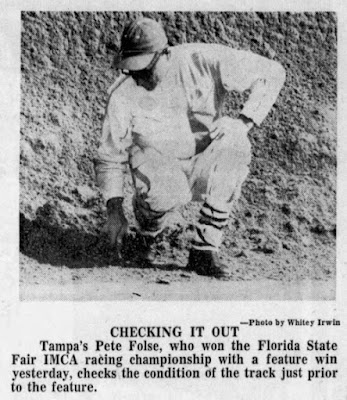 The Saturday, February 16 program was washed out, so the Winternational Sprints finale took place on Sunday afternoon, February 17. To no one’s surprise, Pete Folse sped to a narrow win in the 30-lap feature, winning his fifth consecutive Florida State championship and leaving Tampa with a 135-point lead over Johnny white in his bid for a fourth national title. White, the defending national champion, finished third in the feature.

“I have to get all the wins I can on dirt,” said Folse, following his third consecutive feature win at Plant Field. “Johnny is the greatest driver I’ve seen on a banked asphalt track. And you saw how good he was here on this dirt track. Well, he’s 10 times better on banked asphalt.”

And if you look at the schedule, we have 13 races on banked asphalt, then there are five more on flat pavement. I can run with him on the flat stuff – not past him, but with him.”

Four other times, Folse has left Tampa with the IMCA point lead and three times he was still on top when the season concluded. White upset the precedent last year.

Jerry “Scratch” Daniels – with some help from Folse – slipped into the second spot in the feature, his best showing of the four-day speed program.

“Pete was running right up next to the rail,” said Daniels. “There was some loose stuff there and Pete was throwing it back. Johnny was sliding out on it a little in the first turn and I got under him when he got loose.” Daniels snuck past White two laps from the end.

Folse led from start to finish, hugging the rail the whole way. He admitted afterwards he almost made a costly mistake.

“I almost went with knobbies,” said Pete. “Boy, I would have been in sad shape. I changed just before the feature to the wide asphalt tires.”